One of the issues I've struggled with in the past few years is having too many projects on the go and not enough time. When I do get the chance to do any hobby stuff, I'm overwhelmed by the list of things I'd like to get on with, so usually end up not  doing anything at all. Added to which my painting room is so untidy and disorganized, I find it a bit depressing to be in sometimes. A good hour long tidy up uses up valuable painting time, and invariably the room reverts to chaos again very quickly.

However, I'm often inspired by other bloggers, not least Secundus at IRON MITTEN blog. This guy always has several inspiring projects on the go at once, remembers to take pictures of work in progress and posts regularly. Well worth a look if by chance you haven't seen it.

I'm going to try and take a leaf out of his book and post figures even before they are finished and more general hobby stuff.

I grabbed the nearest lithic from the foothills of the lead mountain, which turned out to be some primed minis I prepared last year for part of my Robin of Sherwood project. I've been painting for a few years to build this collection up , but never posted any of them...that is going to change and I'll hopefully show what I've done so far over the next few weeks.

These minis are going to represent Owen of Club and his hairy rabble.

They appear in the first two episodes ( Herne's Son parts one and two) of series 3 of Robin of Sherwood, and are kitted up for battle towards the end of part two 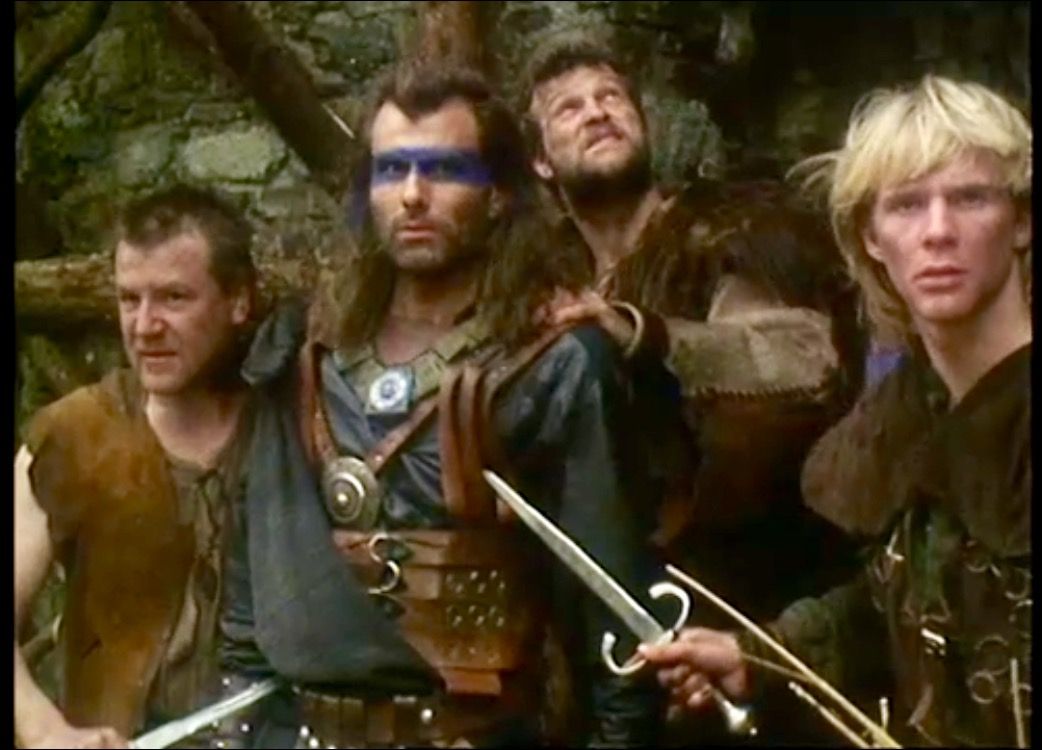 Happily , there was a figure available of Owen. I can't remember the name of the manufacturer ( Loaded Gun Miniatures?) and I snapped him up. I added a shield and a proper Roman groin protector/cingulum as the original mini was lacking a proper one. Owen and his nobles wear a sort of leather lorica segmentata and plaid to distinguish themselves from the grunts so I made a few up using Warlord legionary sprues and Gripping Beast Viking parts, with green stuff fur here and there. The circular chestplates are 15mm shields. Green stuff fur was then added.
The grunts were constructed either using the plastic sprues mentioned, or were Scythians? from Black Tree, which happily were clad in fur and had bowl like helmets just like Owen's men. Shields from EM4 match the cowhide shields or targets used. More green stuff fur was added. 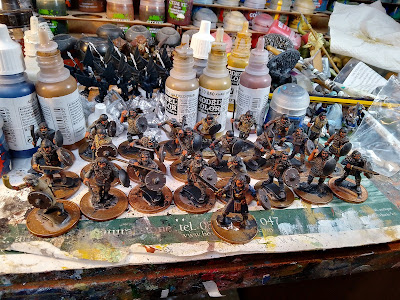 Work in progress. Lots of dull muddy colours drybrushed cream. They will then be washed with Agrax Earthshade.
More to come soon hopefully. In the meantime a shot of the painting table in all its unholy chaos. 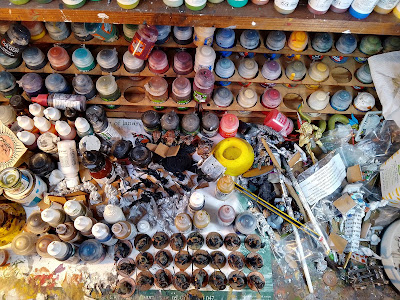 and the foothills of the lead mountain are creeping ever closer. 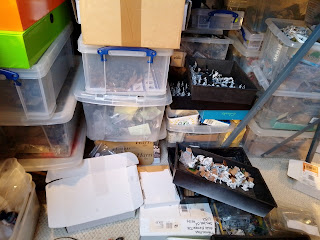 Posted by Springinsfeld at 05:54