Another tiny unit for the defenders. 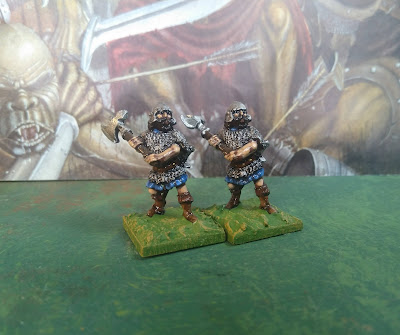 Hinchliffe once more. From their ancient range I think, but I can't remember what code. Anyway he fits the bill. An exciting day today, as we go up to collect the casting machine and hopefully get a few test spins in. I'll keep you posted.

Posted by Springinsfeld at 07:09 3 comments:

Recently I had the opportunity to purchase the rights and existing moulds to a classic old school fantasy range, The Hinchliffe FA range designed in 1979 by Peter Gilder, a demi-god of wargaming in the 70's and 80's. Needless to say I jumped at the chance to get this fun and quirky range back into production and the existing moulds and master figures duly arrived at Broadsword Towers. 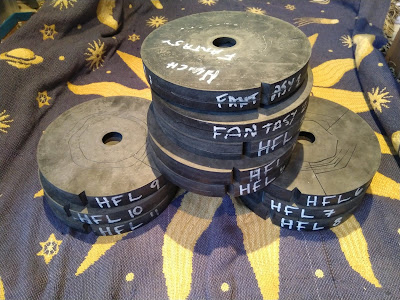 Currently about a third of the 100 figure range have usable moulds and I plan to get these into production as soon as possible. The remaining codes in the range should fit onto 3 more moulds which will be produced when funds allow. 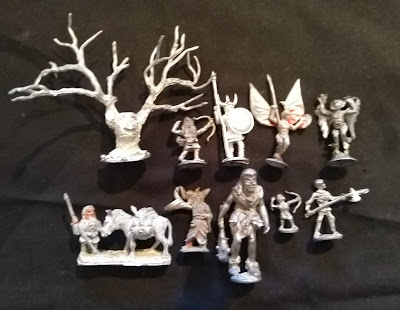 Some of the weird and wonderful old school characters which will
be re-released in the future.
For a look at the full range check Lost minis Wiki
HERE
I have teamed up with the excellent Geoff Solomon-Sims of Oakbound Studio and we have clubbed together to buy a spin casting machine which we are collecting in a week or so. After that I should be taking orders for the first re-releases. Initially orders will be through the blog here (I'll post contact details at the appropriate time), but will hopefully soon be on the Oakbound site.

There is a new page on this blog to showcase the figures (visible on the web version only for some reason),so do check that via the tab at the top of the page. In the future it will be regularly updated with pictures of the Hinchliffe fantasy range and, hopefully soon, bespoke Broadsword Miniatures.

I'm really excited to be getting this classic range back into production and maybe contributing a bit to this great hobby of ours.

Probably the most iconic troop type in the besieging army are the Mumakil. Vast elephants bearing howdahs full of Southron warriors. 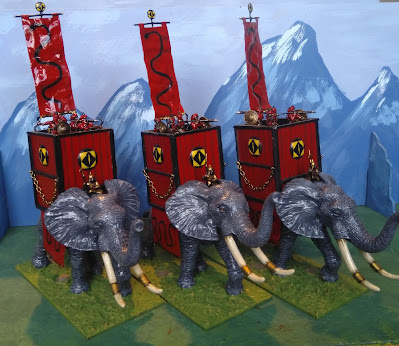 And I can tell you they have been a right headache from start to finish. The first problem was sourcing the correct elephant figure, available in 1984. Britain's produced 2 African bull elephants. An older less detailed one which is fairly easy to find, and then a charging one in the later 1970s which is quite rare and commands a high price even if broken and missing tusks. I started looking back in 2019 and the first ones I saw the sellers were asking £50. As I needed 3, that was not an option, but I eventually managed to ferret out ones listed as "old plastic elephant" and the like, paying no more than £7 each. 2 were missing tusks, but happily an enterprising eBay seller produces pairs of replica tusks in white metal which slot into the empty sockets.

All well and good. I then had to build a howdah for each which fitted squarely on the back but still left room for a mahout figure to perch on the neck. The way the elephant's head is tilted back made the ears extend too far down its flanks to fit the howdah on, do I had to remove the heads, pin them tilted forward a fraction, and then milliput some more neck, avoiding making the Mumakil look like a giraffe/elephant hybrid. 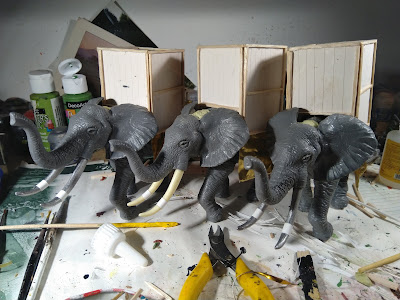 a rare WIP shot, you can see the metal tusks here, and milliput neck extension.
The howdahs had to be built and painted separately, so I could paint the elephants body fully. As it turned out, I was very glad I did this. Upon completion of the modelling, I primed the Mumakil in acrylics, (I often use an enamel undercoat), remembering that Britain's plastic can react with enamel paint. Feeling smug I thought I'd better varnish them by hand with a Humbrol acrylic varnish which looked promising when applied, but overnight dried milky, ruining the meticulous layers of drybrushing I had applied. There was nothing for it but to start painting again.
Anyhow,  once to the beasts were finished I was able to glue on the painted howdahs and fill with angry Haradrim. Hinchliffe again. The spearmen are from the fantasy range, the archers from the Renaissance range available from Lancashire Games. The mahouts are good old Minifigs. 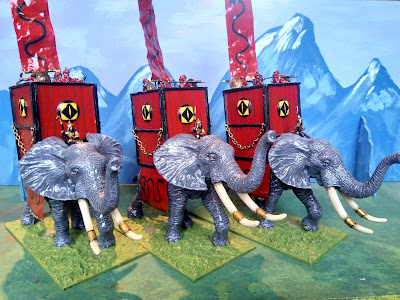 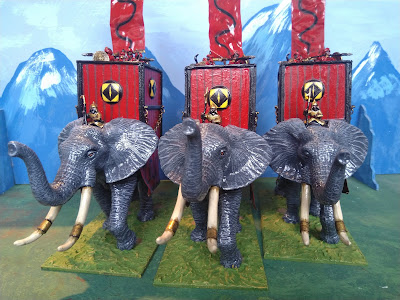 For once Tolkien seems fairly clear about the Haradrim livery.... scarlet black and yellow/gold. Their badge being a black serpent on red field and shields black and yellow. I tried to do a stylised eye on the howdah shields, attempting to make it look like a North African design. The banners and side curtains are made from tomato puree tube and the tusk gilding from adhesive stickers wrapped round.
I'm a good way through painting the Rohirrim and seem to have overcome my aversion to painting horses. I've finished 60 horses and bridles now, and am starting on the riders.

I've completed the Haradrim infantry for the Minas Tirith'84 project. Joe Dever's army lists state 35 figures, but to make 2 equal units I did 36.

The new chaps have spears and are again Hinchliffe Yonderly Men, soon to be back in production. 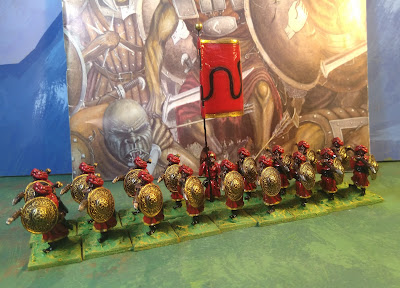 And below, with the scimitar armed unit shown previously. 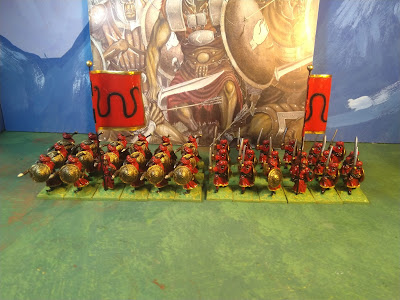 Posted by Springinsfeld at 06:12 6 comments:

Back to Hinchliffe figures for the 300 men of Ringlo Vale. Generic medieval types with generic medieval haircuts from the Robin Hood range again. There's no description of colours so instead of greens and browns I opted for something slightly different which reminded me of some painted Airfix figures I had as a child. 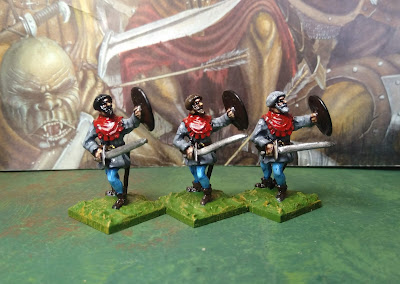 Posted by Springinsfeld at 11:07 6 comments:

PRINCE AND MEN OF DOL AMROTH

More of the goodies, the Prince of Dol Amroth, his knights and men at arms. All Essex Miniatures, which were around in 1984 and still hold up well against modern sculpts. They are always a pleasure to paint scrubbing up well in an old school style or contemporary grubby finish. 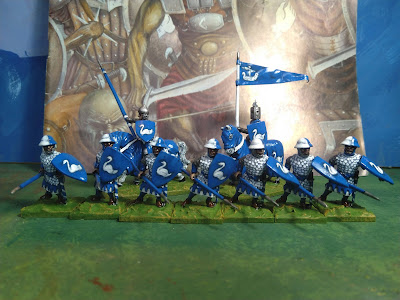 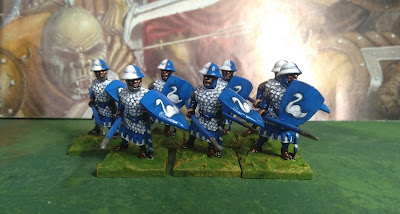 These 13th century men at arms remind me of some of Gary Chalk's illustrations. 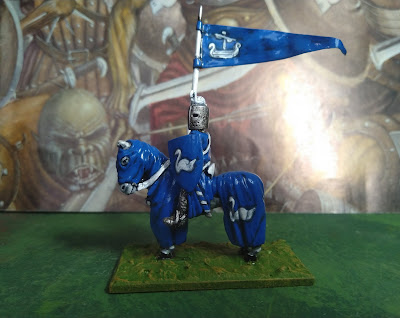 I used the figure recommended by Joe Dever in the article for The Prince of Dol Amroth with his swan crest. The banner is cut up tomato puree tube. 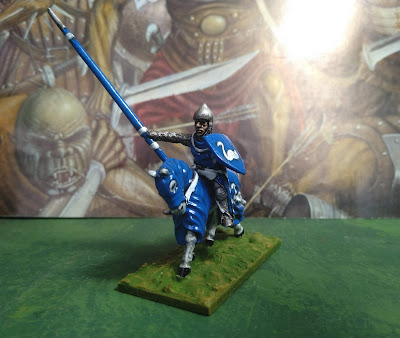 Another Essex figure representing the knights.

A single figure constitutes this unit, this time a Heritage figure from their DKF range, listed as a Fisherman of Ether. 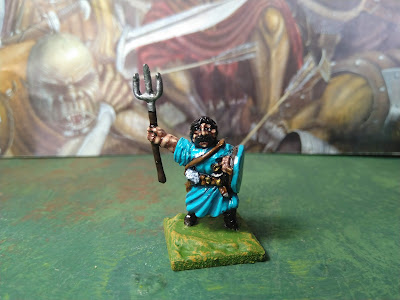 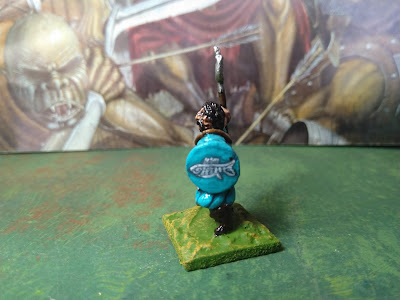 The face came out a bit wonky, not sure if it was the casting or my painting.

Posted by Springinsfeld at 11:30 3 comments: