A couple of weeks ago I bought , via ebay, a batch of figures I used to have back in the very early 1980's, Grenadiers Tomb of Spells boxed set. These were the first official Dungeons and Dragons figures I had heard of then (not realising Minifigs and Heritage had both produced Dungeon ranges) and I was very excited to read in White Dwarf that they were about to be released. On my twelfth or thirteenth birthday I duly recieved the set from my folks, and it has to be said I was profoundly disappointed with the figures. To my young eyes they were static poses, fuzzy detail and really bizarre armour on the skeletons. I suppose I kept them for a while, but then had a great clear out of fantasy figures (to my everlasting regret) in the late 1980's in which they must have gone to some Bring and Buy stall at a convention.

Looking at the early Grenadier figures now, with rheumy bespectacled eyes, I think they are absolutely  charming. They were certainly behind their time when compared to some of the figures Citadel were producing at the time and more so Ral Partha's finely detailed sculpts from Tom Meier but they simply ooze character, and I am planning on collecting all the early boxed sets.

The figures duly arrived this morning from The States courtesy of Silverhawk Miniatures, who provided excellent friendly service. Apparently there were 3 versions of this set released with a few variations, and it seems I had the rarest as a youth (not that I knew it then) which contained a rather nice Minotaur. Greg at Silverhawk kindly provided all the basic figures contained in all the sets, and also some of the variants, including the particular Efreet I had originally with folded arms. I had already purchased the Djinn elsewhere (which has yet to arrive) and am still seeking the Minotaur, but I am really looking forward to painting these up, although I will be pushed to match the standard displayed on Belched from The Depths blogspot.
http://belchedfromthedepths.blogspot.co.uk/ 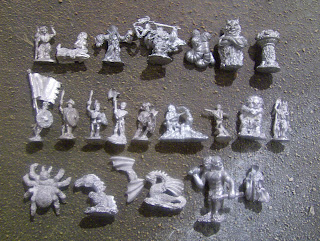 Posted by Springinsfeld at 22:26

Email ThisBlogThis!Share to TwitterShare to FacebookShare to Pinterest
Labels: Dungeons and Dragons