I SEE A DARK SAIL ON THE HORIZON


So begins the song Broadsword from the Jethro Tull album Broadsword and the Beast. I have started this blog to show my fantasy figures and models, without interruptions and random warblings concerning historical figures, my work, family etc. which are on my other blog http://mercuriusatticus.blogspot.co.uk/

I have recently been really fired up to get back into fantasy gaming, partly by my oldest son Robin (10) who is starting to collect figures, and paint them alarmingly quickly, but also by the wonderful Old School D & D and Oldhammer movement which has some fantastic blogs appearing showing all the figures I had back in the 80's, painted superbly. My own personal opinion is that Games Workshop, the Evil Empire (ok, they have done a huge amount for the hobby, and I used to love them) is living on borrowed time, they have become so staid and boring, and outrageously overpriced.

Anyhow, I will post figures up as I paint them, along with other witterings, and hope some other old school fantasy bods out there like them. Having 3 children and a fulltime plus extra job, my posts may be a bit irregular or brief, but I will do my best.


Back in the mists of time (1983 or 1984) I went along to Games Day in London, held at the Royal Horticultural Society Hall to spend my pocket money on D and D figures. One of the highlights for me was a talk given by the fantasy artist Iain McCaig, who at the time was forging his career and had recently painted my favourite ever album cover Broadsword and the Beast by Jethro Tull. Mr. McCaig related how he had fallen asleep at the easel, and woken up to find he had painted all the Runes around the edge of the cover, and he didn't know what they said. Great story, but I suspect he knew they were the words of the first verse of the song Broadsword on the album.

Anyhow, this made a profound impression on a callow youth like myself, and I resolved to make a model based on the ship shown on the cover. 30 odd years on, I have finally done so!!

Here is the front and reverse of the sleeve, showing Ian Anderson the lead singer of Jethro Tull (and a superb songwriter and musician) as a strange Beastie. On the reverse he is riding on the figurehead of the ship. I reckon Iain McCaig was only in his early 20's when he painted this, so he must have been delighted to land the commission that produced this iconic piece of rock art. 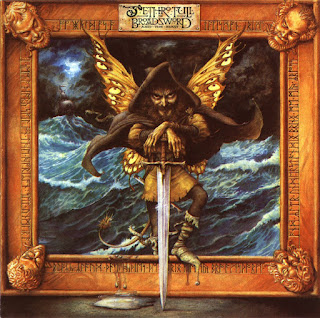 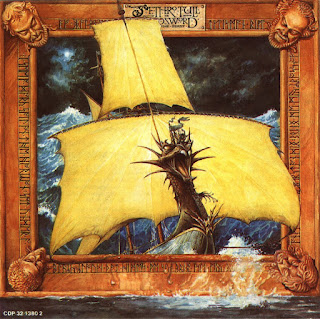 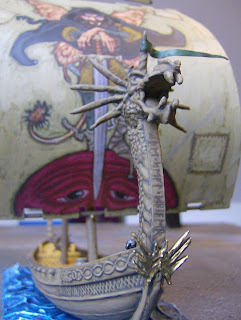 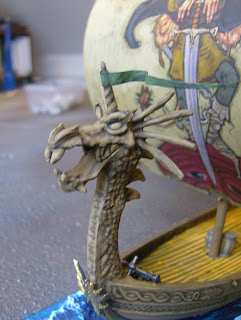 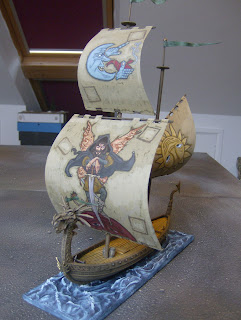 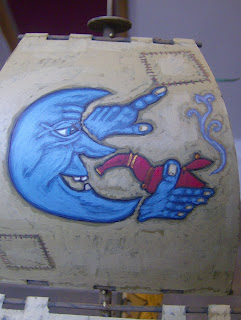 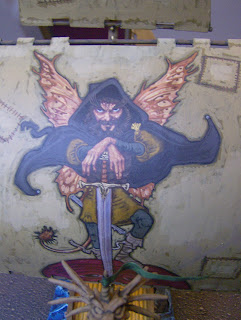 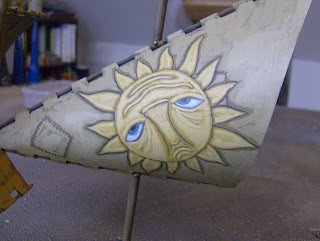 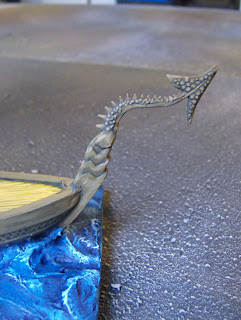 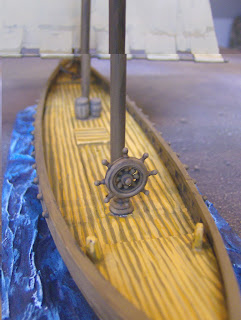 I think I will crew the ship with some Dwarves from the old Grenadier range. The sails depict The Pewter Moon (badge of the Dwarves of the Pewter Moon, one of the factions in my fantasy world, where I live a good deal of the time), the Sunchild, another reference to a prog rock song( from King Crimson this time)
and the Beastie suppressing The Crimson King, who is the baddie/evil empire etc in my world.

The ship is a viking Drakkar by......can't remember, but Eastern European company I think, with a heavily converted Papo dragon head pinched from Robin and Arthur's soldier box (thanks chaps).

I painted runes on the figurehead..... anyone care to have a crack at translating them?

Posted by Springinsfeld at 23:36