Foraging around in my figure boxes a few months ago a managed to assemble enough of these old Minifigs elves to make a unit for Oldhammer. I have a vague dream of building the armies for what I believe was the first ever Warhammer scenario published in White Dwarf 45, where 2 armies, evil and good (life was so simple in those days) battle it out over a village called Thistlewood. I will try and scan the map and details of the scenario in a future post. Back in 1982 I spent hours poring over the grainy black and white photos in the article, and dreaming how I could get enough cash to buy 20 man units at 30p a figure....it makes one weep to think about it now.

Here are the Loyal Half Elves in the good army. I like these figures because they have a slightly sneaky air, which is how I feel Elves should look (I was very impressed by the look of Thranduil in The Hobbit film, a shifty looking cove if ever I saw one). They carry their own banner of the Green Man, but the sun shows their allegiance to the mainly human army. I have not finished the bases, partly because I am dithering on how to do them, but also because I like to do an army or battallion en masse so the bases are all the same 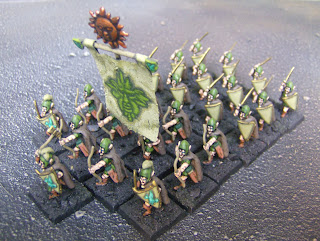 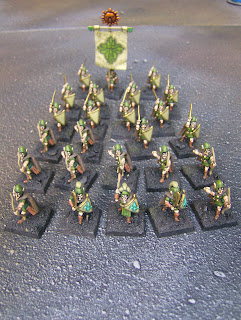 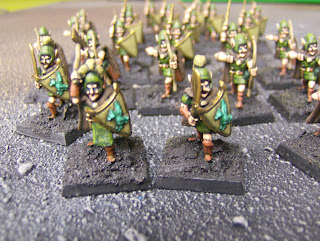 On the subject of the Oldhammer movement, is is interesting to see different perceptions of Old. For me Citadel began to go tits up when they amalgamated all their codes into the C series and then changed to slotta bases....( I was furious at the time, but of course slotta bases are quite handy for conversion purposes),
but looking about at some of the fantastically painted Oldhammer armies I simply don't recognise the figures because they date from the later 80's, by which time I had immersed myself in ECW wargaming (oh, and drinking and chasing skirt).

Posted by Springinsfeld at 21:50