WE TRAVELLERS ON THE ENDLESS WASTES

Most of my ideas for fantasy armies and units remain firmly in my head as I never get round to doing anything about them, or if I do it is sometimes literally decades later.  I like basing armies and units on prog rock songs and imagery such as my Broadsword ship and I have several ideas for figures inspired by the songs of Jethro Tull. One song (The Clasp) on the Broadsword and the Beast album starts "We travellers on the endless wastes..." which has always conjured up images in my head of characters battling against driving snow or at least walking through an endless snowy landscape, a bit like the elf like figures in this Jackie Morris picture above, and perhaps these Dark Elves by John Blanche in The Seven Serpents by Steve Jackson. 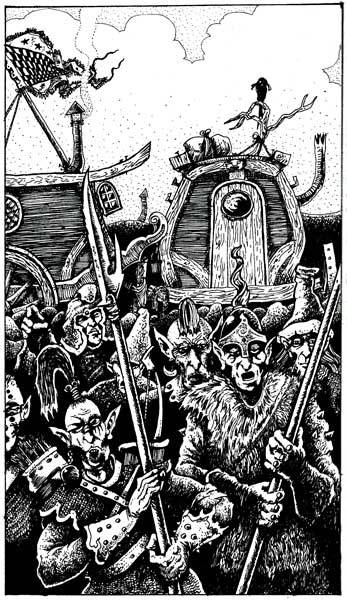 I've been casting around for figures to suit the look I'm after and the solid base Citadel High elves are just the ticket... sculpted by Aly Morrison and released in 1984, they are fur clad, have slightly Slavic features and Russian looking armour so scream "cold endless steppes" to me. I've collected about 30 which will be enough for a couple of units. Combined with some Polar bears, gypsy caravans and a suitable paint job they should do the job.

I've so far painted about 14, and it's slow progress as I'm getting  2 hours a week painting done, but we'll get there.

Posted by Springinsfeld at 12:34