Another very old kit is this old Airfix church , again still available from DAPOL . I've seen it appear in a number of early Warhammer games, such as this splendid display by the Players Guild in 1986. 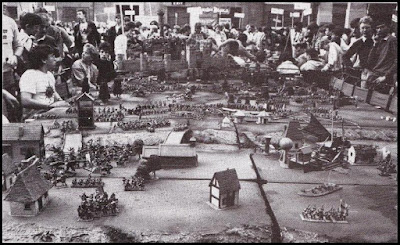 There's the church, in the middle of the picture.

Back in the day there was no Sigmar, and feudal medieval fantasy states seemed follow a sort of woolly Christian religion. In the Thistlewood scenario King Amias' kingdom has a band of fighting monks called The Knights of the White Lord, who fail to show up for the battle incidentally. The church priest, Priest Varlie is made of sterner stuff, and I will be painting an early Citadel Cleric to represent him. Meanwhile here is his church. I left off the most of the crosses as they were likely to snap off anyway, but added a little shield over the doorway. 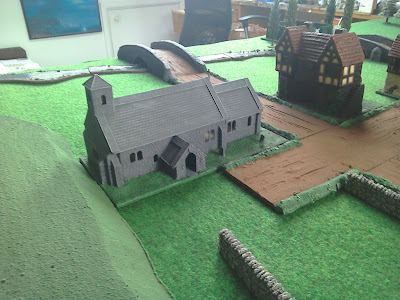 Posted by Springinsfeld at 12:14