THE VANIR ARE COMING

As promised I have finally got around to photographing my decade old Warhammer army (they let me out of work for the day, and I am having a nice time at home). I became re-infected by Games Workshop about 12 years ago after a very long break from Fantasy gaming. Partially due to there being a really good member of staff in the local GW who was just interested in modelling rather than flogging stuff , but mainly due to the release of the Marauder horseman and infantry plastic box sets. I had been waiting for figures like these since seeing Conan the Barbarian back in the 80's, the initial village attack scene in particular (can anyone send me a link to this on youtube? I can't find it anywhere).

Here is the first shot of some of the cavalry of the Horde of the Glacial Rift, a Vanir tribe out of my head. I don't really like the GW official chaos line with gribbly mutations and 4 gross chaos gods, so I tend to set my stuff in a sort of Hyborian world. 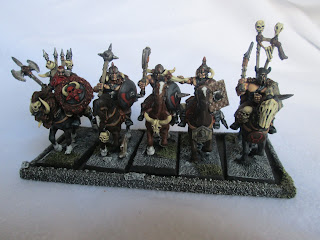 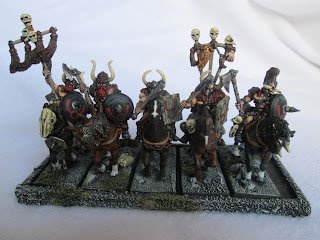 Mainly Citadel figures, some riders are made of marauder sprue torsos on Kislev horse archer legs. Top right rider has a very old head from the first Citadel Speciality set of Chaos Warriors (I bought 3 or 4 of these when they came out, but sadly only kept the spare heads when I sold off most of my fantasy stuff a few years later (NEVER EVER sell or get rid of anything). Some of the horse chest plates are old Minifigs shields, and you can see my Horned God rune which pops up on a lot of my figures (from Runequest) More hairy ginger barbarians to follow.

Posted by Springinsfeld at 13:53