I finished these chaps (bar the bases) a while back but have just varnished them. The Black Sun Goblins are the other large unit in Lord Vassago's army. Unfortunately these rather nice Fiend Factory goblins have a wolf embossed on the shield, so now the tribe has been renamed the Scarlet Dog Goblins. These chaps fit perfectly my idea of goblins in The Hobbit (rather than the ghoul like abominations in the latest film) and I hoovered up loads on ebay about 8 years ago with a plan to use them in a Battle of the Five Armies game,  I painted them so I could use them for that as well, a bit dull and grubby, hopefully the bases will brighten them up a bit when done. 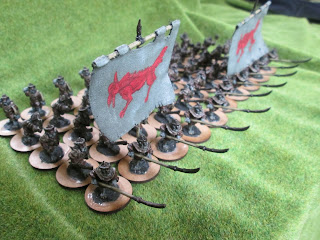 I replaced all the spear/naginata with new ones from Dixon miniatures as the original ones had gone a bit bendy or broken. 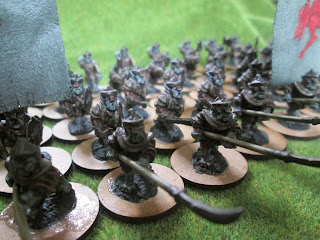 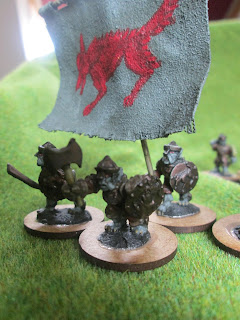 The usual mantra (in case you are new), I will complete all the army bases in one fell swoop (with the aid of my friend Speckled Jim).

Posted by Springinsfeld at 18:09