My wife and three boys went to stay with a friend in Wales for a day or so, so I took Friday off after dropping them up there on Thursday and motored through a batch of ancient Minifigs skeletons for my Oldhammer Thistlewood game. The army list in White Dwarf 45 states Vassago, the evil liche lord of the Northern wastelands has a mixed army of undead , goblinoids and wyverns (hurrah), and as I am doing this project in an Oldhammer style I was pleased to use some of my box of Minifigs Valley of the Four Winds Skeletons, some of which I have had unpainted for 34 years. The figures suggestions at the end of the article mention Citadel's Fantasy tribe range, but I do like all the same pose in my units.

I still love these figures, based on Bruegel's painting The Triumph of Death 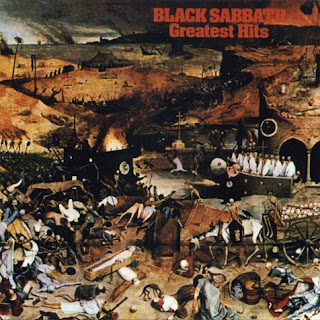 (also used on Black Sabbath's Greatests Hits, which was released before Ronnie James Dio started singing with Sabbath, and therefore contains none of their greatest hits). They have that macabre look of relentless animated corpses, that are not quite skeletons yet. The figures themselves have very shallow detail, so don't pick up washes or shading well, but have that real old school charm. Some of these figures I picked up secondhand and although I did my best to strip them, they are so fragile I was worried scrubbing with a nailbrush after oven cleaner treatment might finish them off altogether, so the original thick gloss paint remains underneath. 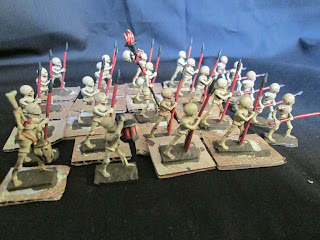 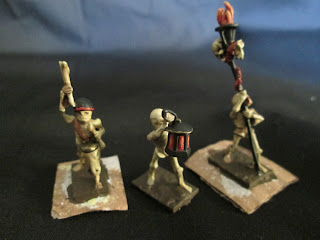 These aren't old school bases by the way, just the card I use to hold them when painting. Should I put them on 20x20 or 25x25 bases I wonder.

Posted by Springinsfeld at 16:59