BRIEF INTERLUDE AND WALK IN THE WOODS

In a few weeks I'm attending the first The Woods Games Day, organised by Geoff Solomon-Sims of Oakbound Studio, in the Woods of Nailsworth Gloucestershire.
I needed to cobble together a warband and whereas I normally go for brute strength and minimal tactics in any game, I happened to have a number of suitable figures lying around to make a Leprechaun clan, tricksy fate weaving, owl loving mischief makers.
I'm underway painting these attempting them in a Grubdark style ( like Grimdark but without the grossness). For an old school fan, I actually quite like a lot of the new gloomy Grimdark style of painting and aesthetic, but sometimes the figures are a bit too icky for my tastes.
I started with some owls, which didn't come out as gloomy as I'd hoped, but I was quite pleased with them nevertheless. 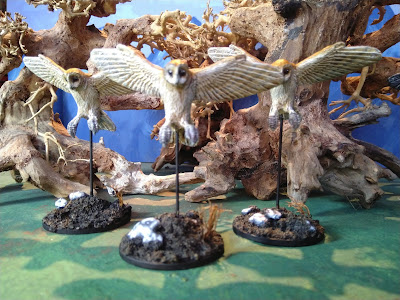 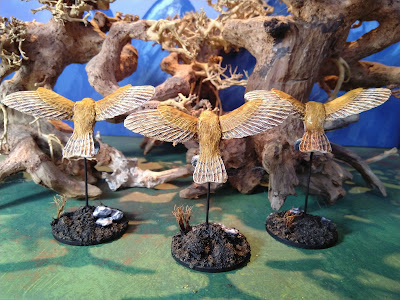 I was also happy with the bases. Perhaps not that visible here, but nice and textured and minimal colour. The owls are from Otherworld Miniatures btw. I either got them in a sale or swapped some figures with Richard Scott the owner, because I definitely wouldn't have paid £11 each for them which is the full price. Very nice figures though. Some leprechauns themselves coming next.
Posted by Springinsfeld at 05:51

Email ThisBlogThis!Share to TwitterShare to FacebookShare to Pinterest
Labels: Grubdark, The Woods