We are living in surreal and frightening times, although there is a sense among my younger boys of battening down the hatches, turning the house into a fortress and I suspect a feeling of cosiness and safety as the world collapses outside... can't say I feel it myself (more abject terror and worry) , such is the burden of adulthood, but I can remember the feeling from when I was a child and either being snowed in or having the power cut off frequently.

Last summer, Sprinks issued a challenge to complete an army for £30, which I have finally done hurrah. In fact I have spent about £40, but remove the extra tenners worth and you still have a playable army. The final piece was one of these fellows below, but as I had 2 beetle kits I had to make them both up. I had £4.99 left to spend and I picked these Heller kits up from the now deceased Wells Model Centre about 15 years ago for £4.50 each. The howdahs and crossbows are scratchbuilt and the 3 crew are from EM4 and were about 15p each (in fact I've just ordered another 50 of each pose), so I think I scrape in at £29.95... trumpet fanfare dwindling off discordantly as I realise I am 8 months too late. 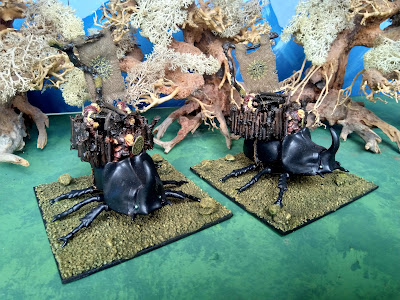 Giant Beetles from the mossy gorges of Shatford 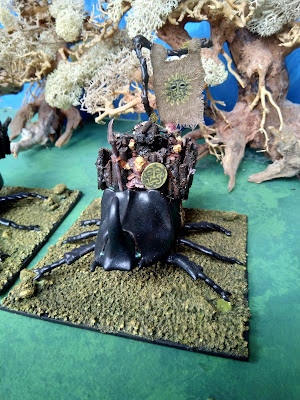 When I saw these WOLDLICE from Oakbound Studios, I had to grab some, and I thought they would fit in with the army but not as part of the challenge. The army is lacking in quick moving units as wolves don't really fit in with the narrative of the Gubbins Tribe. I have renamed them Mossfleas and imagine they can jump unnerving distances. 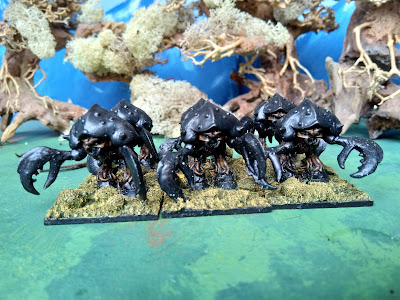 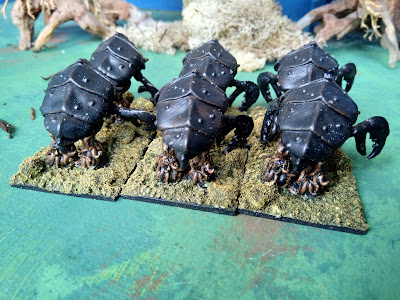 Here's the army as it stands, with a unit of extra archers. Wilderness and wood dwelling orcs should have loads of bowmen I think. The trees came from the pet department of the local garden centre and were in a sale. They have a real Roger Dean look about them, and I hope to base them and tart them up a bit... in fact the whole clan could do with some bespoke terrain when time allows. 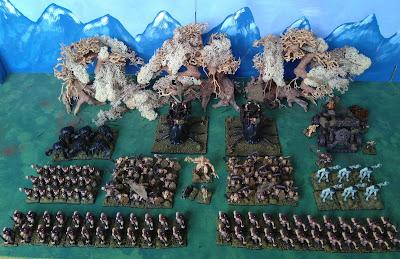 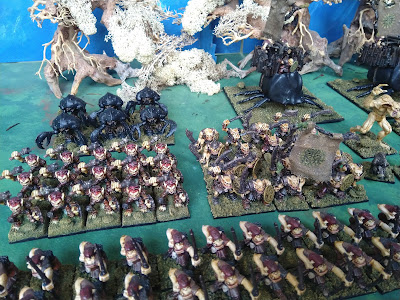 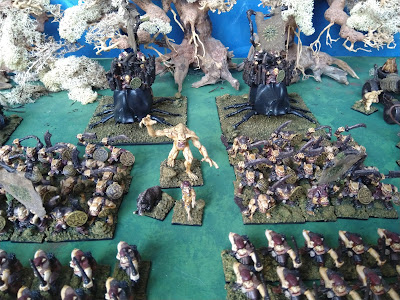 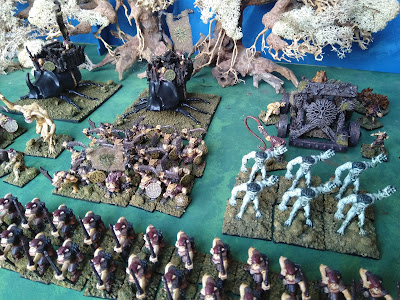 There is one more figure to come which I have to get done as part of the Lockdown Challenge issued by Geoff of Oakbound. Paint up the most minging badly sculpted figure you have in a week! Hmmm.. well I have quite a few that could fit the bill but I'll show you the polished turd in a few days with some luck.

Posted by Springinsfeld at 15:54