Some time ago , the noble and erudite Sprinks of Wronghammer fame issued the following challenge

naturally this appealed to my parsimonious nature and I plucked up the tattered fingerless mitten from the dust and accepted the challenge. This of course is as far as it went until I uncovered another bag of cheapo plastic orcs at the Lincombe Barn Wargames club tabletop sale. Progress has been glacial to say the least, but this is the story so far. I decided to use standard Warhammer figures, but the cheapest I could find

presenting The Gubbinses of Shatford Lea 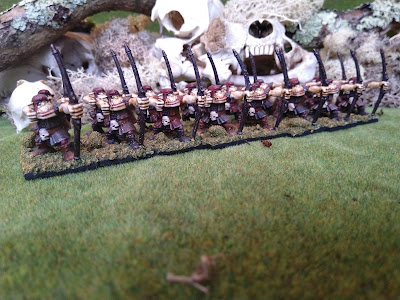 This little lot I picked up a year ago at the same show... 17 figures for a £4. Some had been painted by Blind Pew using an industrial paint roller, but I just undercoated straight over that without stripping.

The grunt and bile of the army cost a tenner for about 56 figures, some of which were broken. I sifted out the best and added shields bought at the same show 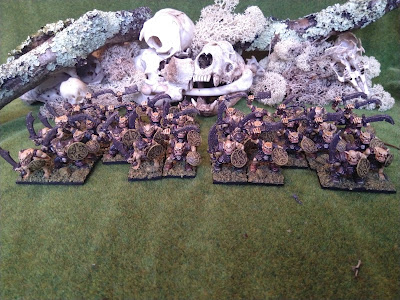 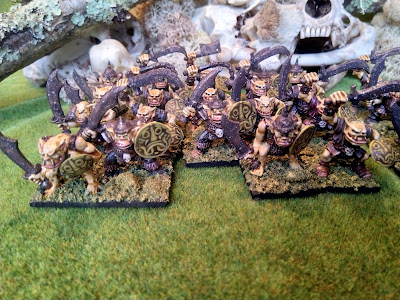 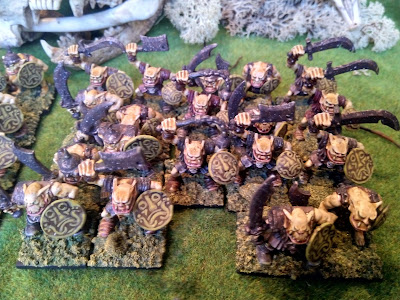 The gaps in the front ranks are for the standard bearers, WIP 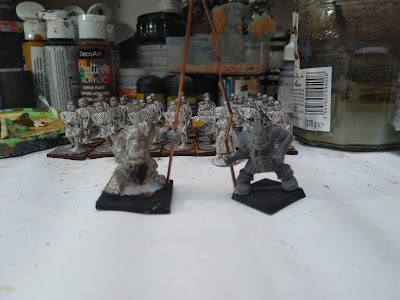 The chap on the right was one of the broken figures, and the metal dude was from a rummage bin at last weekends show, Attack at Devizes. He cost 50p and was missing a hand. Happily I have had one of the kid's old goblins riding around in the glove box of the car for about 2 years, and he willingly sacrificed his hand for the greater good. I might use him and add a hook later. (note newly tidied workbench for this photoshoot). 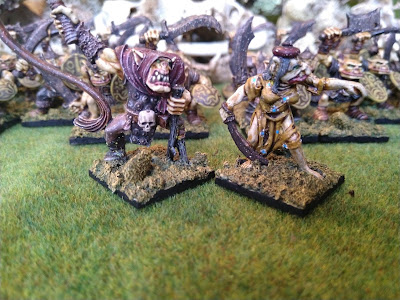 A couple of personalities. Uncle Frank on the left will be crewing the catapult when it is painted (a 10p plastic ELC job from a charity sale). Uncle Frank was gleaned from a comic book show last year where I was helping Geoff from Oakbound man his stall. We didn't sell much, but were pitched next to a chap with a huge dumpbin of old figures. I bought a bundle and they worked out at 32p each.

Mother Gubbins, the matriach of the clan and mother of them all is a Runequest figure I have had since the early 80's. She comes from a set of 10 figures which were (I recall) £4.99, so she cost err ...(counts on fingers) 49p. 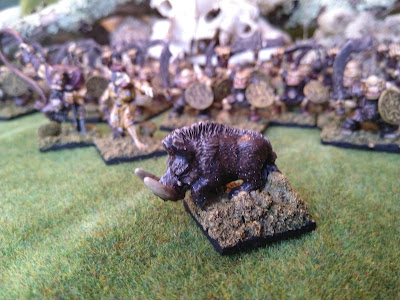 Trotter came from Devizes Attack a couple of years ago when EM4 Miniatures had rummage bin of old game pieces. I missed all the Deep Ones which the git in front of me showed me as he skipped off with them gloating, but there were a few odds and sods worth buying for 30p each. I also bagged a bundle of goblin types from the same bin which should be painted very soon.

So £15.61 spent so far (I think) of the £30 limit. Lets hope I can interpret the challenge flexibly and get the whole of August to paint in too.

Posted by Springinsfeld at 20:27