LORD DRAPE AND THE BARROW BOTHERERS

Having singularly failed the Sprinks Skinthammer Challenge mentioned in the last couple of posts, I would just like to say the cheapwad penny-pinching parsimonious orc army, will be finished by the end of November (I hope). More soon...

In the meantime I was diverted by the upcoming GROGG (Gloucestershire Retro and Oldhammer Gaming Group) Halloween game which is on the near horizon. Geoff at Oakbound Studios has set the scenario which involves the hunt for the fabled Ratspike. A potent magical artefact which will prevent each players liche from crumbling to pieces and ending ignominiously as a head in a jar.

Each player is allowed a Liche, 2 henchmen, and 4 other units from the following
1 Apprentice
2 Bodyguards
5 Cultists
10 skeletons

After scrabbling around for suitable figures, I came up with the following. 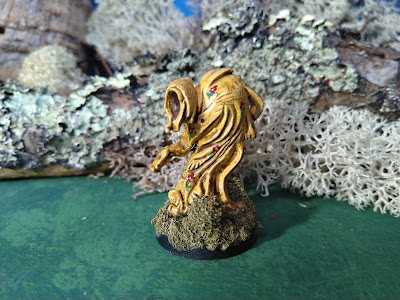 My Liche, Lord Drape. I say my liche, but in fact he is neither mine nor a liche . Back in the 1980's a group of chums and I  used to have some cracking Fantasy games using WRG Renaissance Rules. Neil, one of the aforementioned crew always fielded the craziest best painted regiments and characters ,one of whom was the legendary Lord Drape (aka Citadel Fiend Factory 3 Wraith on Undead Horse). The original Lord Drape figure is no doubt residing in some metal toolbox in Neil's attic, but I hope he doesn't mind me continuing the legendary exploits of this well wrapped character.

Almost four decades ago Lord Drape was a feared and respected mercenary general. Commander of the feared Undertakers, a regiment of Hobgoblin pikemen who were the scourge of many a battlefield. With  his myriad conquests his reputation increased, gold poured into his coffers and Drape began to harbour secret desires to overthrow his royal employer and crown himself King Drape the First. Unfortunately as is often the case, his masters got wind of his machinations through the treachery of one of Drape's mercenary colleagues , a shadowy figure known as The Graf. During a particularly heavy bout in Windy Jape's Liquor Emporium , Drape made some unguarded comments about his ambitions which were duly reported by The Graf to the powers above. It was arranged that Drape should be assassinated. The next day, Drape was summoned to the residence of the King's chief vizier and wizard Dr. Jesmig under the pretext of receiving a new assignment. Nursing a dreadful hangover, Drape stumbled to his doom. The Graf was waiting behind the curtains with drawn swordstick and as Drape downed the Prairie Oyster Jesmig gave him , The Graf emerged and plunged his sword through Drapes many wrappings.

What followed next surprised everyone. Instead of Drape falling to the floor bleeding conventionally his cloak and mufflers dropped to the floor as if empty. Jesmig, well versed in the dark arts quickly perceived that Drape must have had some arcane knowledge himself and his spirit was about to escape out of the open leaded windows. He gabbled an incantation hoping to stop Drape's escape but only succeeded in slowing him down. Drape's non-corporeal form became entangled in the curtains, but with a clatter of breaking pelmet both spirit and curtains squeezed though the window and were gone, leaving Jesmig having to consider a trip to the soft furnishings shop.

Since then Drape has inhabited the curtains, not unlike his previous apparel, other than they are golden yellow and embroidered with roses. He has given up his mercenary career and now studies magical lore , becoming a warlock and Necromancer of mickle might. Drape believes the Ratspike will be able to rid him of an infestation of moths and aid his revenge against The Graf and Jesmig. 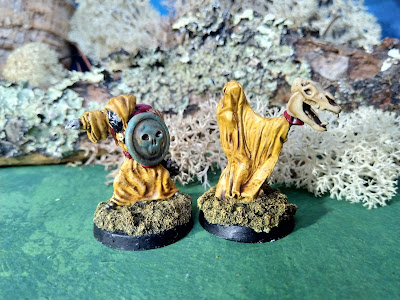 (Clopsy is an Oakbound Miniature, and Mungo an Asgard figure)

Henchmen. Clopsy and Mungo. Sadly , horses don't live as long as bodiless apparitions, and Drape's beloved horse Clopsy passed away soon after the bungled attempt on Drape's existence. Unwilling to continue his adventures without his faithful steed,  Drape now has a servant (also called Clopsy) who carries the horses skull after Drape, making neighing sounds and asking for sugarlumps.

No command figure should be without a minion next to him pointing, and Mungo fulfils this role. He also carries all Drape's essentials in a red haversack. Spare curtain rings, darning needle , stain remover, and all the little extras an animated pair of curtains may need. Mungo also caries a large bronze shield , looted during one of Drape's archaeological/necromantical expeditions. With this he can fling himself in the way of any missiles aimed at his master. 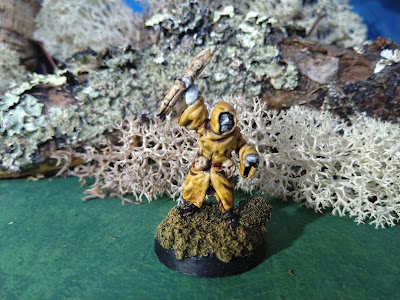 (Norris is an old Citadel Necromancer)

Apprentice. Norris was a second year undergraduate archaeology student at Trompenburg University, when he heard tell of rumours of disturbed graves and barrows, the contents seemingly having clawed their way out. Intrigued he set watch near an undisturbed barrow (known as Jug's Grave) and sure enough witnessed the power of Lord Drape as the warlock summoned the ancient cadaver from it's resting place.  Norris's gran had the same curtains that Drape now sports, so it's a nostalgia thing as well. 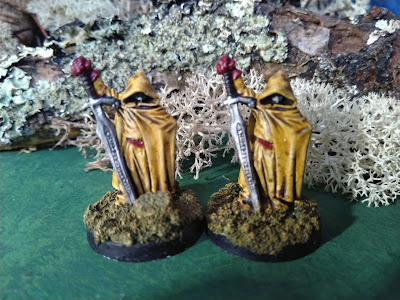 (The Quillons are by Ral Partha)

Bodyguards. The Quillon Brothers. Norris has appointed 2 brothers to act as bodyguards to Lord Drape and himself. Unfortunately being short of capital, the best he could find were the diminutive Quillon brothers. Still, they do have very big swords. 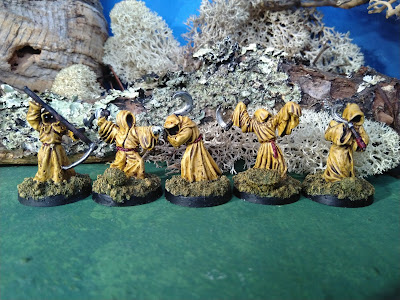 Cultists, The Barrow Botherers. These 5 were amateur archaeologists and treasure hunters who became fed up with the laws and rules governing the protection of ancient sites of interest. They want to dig up old burial mounds and see what's inside! Happily, following Drape gives them ample opportunity to loot these places, once the bodies have been animated of course. They call themselves The Disciples of Drape, but everyone else calls them Those Dratted Barrow Botherers.

All Drape's living servants wear the same yellow to match their master (conveniently for painting speed). 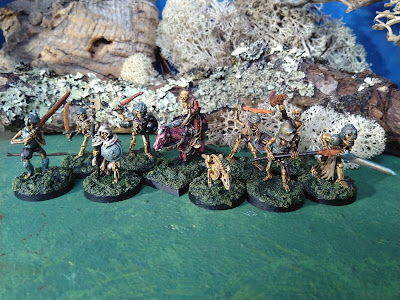 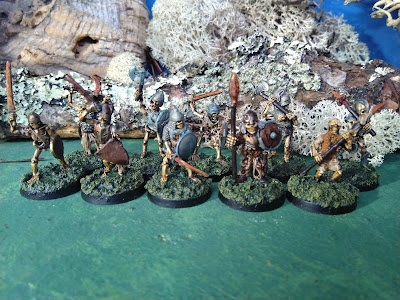 2 units of 10 skeletons. These chaps are the results of Drape's excursions , cadavers from times of yore, animated to do his bidding. They are led by a less decomposed body on a smelly horse called Rawhead and his faithful hound Rattlebone.

The skeletons were finished for last years game , which unfortunately had to be cancelled.

I have painted more units than I am allowed and I suspect the Quillon brothers will not be fielded, but we shall see. Can't wait for the game on November 9th.