There are 9 of these Fantasy Tribe orcs in the picture of the Joe Dever fantasy battle I am re-building. I scraped together about 10 from the first release (about 1982?) and another 10 from later 1984 releases. I hated these figures when they came out, with their grotesque lantern jaws and tusks, and am still pretty ambivalent towards them now. Still, needs must, and they painted up pretty quickly. I wanted them to look as if they lived in some old cavern filled with midden, hardly ever venturing out unless summoned by their Overlord, the Crimson King. They are in mi-parti uniforms of red and yellow, as the Crimson King finds their antics moderately diverting. 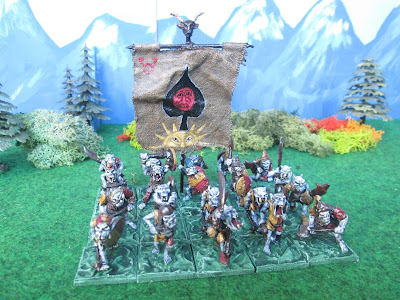 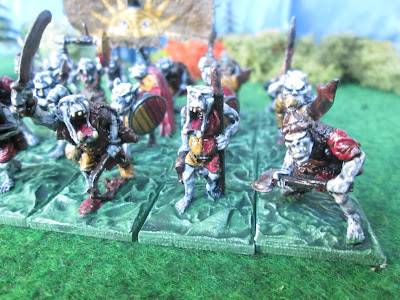 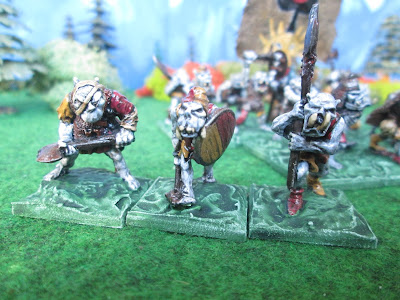 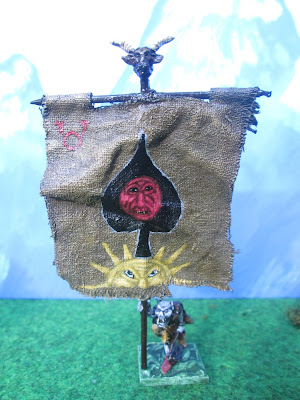 The banner shows the Crimson King ascendant over his enemy the Sun Child. In the corner is The Vile Rune, showing the Dunghill Jesters are members of the Vile Rune Co-operative of various orc tribes. Most (but not all) of my goblinoids sport this Rune. The banner top is an old Citadel Broo head.
Posted by Springinsfeld at 13:26