I've been a bit busy to post recently, but thought I would show a WIP on the Thistlewood front. Below are the remaining figures to finish - 20 elves (there are 40 here for future LOTR games) and the villagers. (plus a couple of vintage trolls which sneaked into the picture) 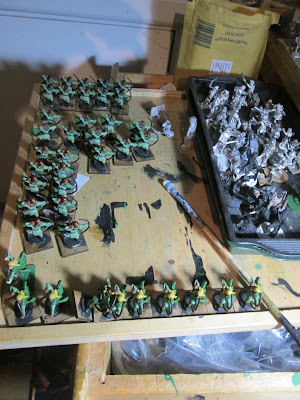 I recently bought a pile of 80 Minifigs hobgoblins (for my future re-creations of some of Joe Dever's early fantasy battles) which were encrusted in gloopy paint. I haven't had much luck with the Dettol procedure, finding the paint gets even more tacky and tar like as I curse and am overcome by the toxic fumes. I thought I would try immersing the first 10 of these chaps in a jam jar bath of Mr Muscle oven cleaner. In 2 days the paint just dissolved and the figures looked almost as good as new....huzzah! 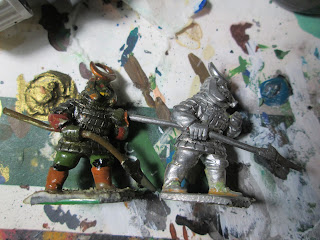 BTW, I saw some late 70's fantasy figures on ebay, described as "Bronze Age" meaning 1975-1980ish..... does anyone else know about this categorization?

Finally a shot of my lamentably untidy painting desk. Bottom right is a Hinchliffe catapult to be an extra for the King's army. 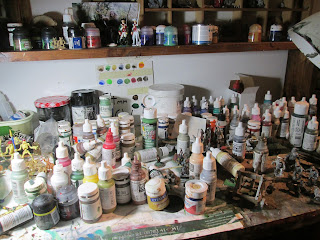 Posted by Springinsfeld at 20:22