TO CATCH A THIEF

Last week, I had a comment from a reader called Yaztromo's Confectioner , informing me of a battle report in the magazine GM, featuring Joe Dever's collection. Needless to say I was on eBay in seconds and found the correct issue April 1989 for a couple of quid. It arrived yesterday and I quickly flicked through to the correct pages. The first thing that struck me was the truly stunning mullet sported by one of the participants, but once I overcame my shock at seeing that I settled down to read the article called To Catch a Thief. The scenario appears to be set in the world of Lone Wolf, ie. Magnamund, but in most other respects it's a direct copy of the Thistlewood scenario in White Dwarf 45. We have a thief called Dal Khordas ( in Thistlewood he's Foro Malas) who has stolen a magic sceptre (TW a chalice). The good king Alin (TW Amias) has mobilised a small force to hunt it down aided by his ally Prince Pelethar (TW Baron Galen). The villain Kraagenskul ( TW Vassago) is keen to find the sceptre which the thief has hidden somewhere in the village of Marshbury ( Thistlewood). The forces have to hunt through the village looking for the magic artefact. There's even a teleporting tomb/ crypt and a magic sword which attracts undead just as there is in the Thistlewood scenario. Sadly there are no maps or army lists in this article, but several tantalising pictures where I can see stalwarts of Joe's collection as well as newer slotta based figures. This really is a great find and I'd like to thank Yaztromo's Confectioner for bringing it to my attention. 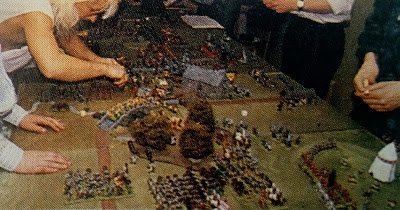 The resin church in the centre was in the last report I found. I have one of these, but don't know the manufacturer. 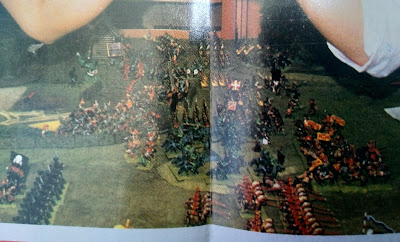 The unit of red cavalry was in the last report I found, and I believe they are Minifigs Cataphracts.
To the left we have an entire unit of LOTR mounted Nazgul...I can only assume Joe had access to cheap figures from Citadel. 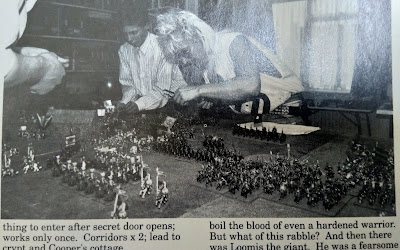 Left foreground some Riders of Rohan from the 1985 Citadel range... behind them are Knights of Dol Amroth which featured in Joe's later games as Knights of Durendor from Lone Wolf. 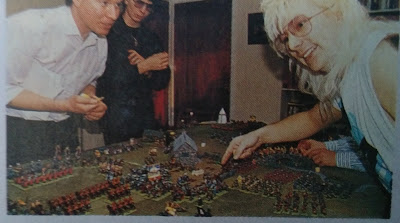 Pretty sure I can see a big unit of Lone Wolf Giaks in the right foreground. Far left midground are the Red Minifigs knights that crop up in many of Joe's games, including Thistlewood.
Posted by Springinsfeld at 07:49