It's been ages since I posted any figures, but I haven't been idle. Amazingly I stuck long enough at a project to actually complete it (well, almost complete it). I was thinking about doing some new fantasy stuff, but in bite size chunks, so fell back on that great rule set, Hordes of the Things. Half the fun of these rules is planning your army, and trying to incorporate all the figures you want to use into 24 points. Inevitably I ended up painting  more than I needed, as well as some figures to use with the army when playing another ruleset.

Here we have then, the Pewter Moon Dwarves, implacable enemies of the Crimson King, they dwell in lighthouses and granite castles along the Northern coasts of Gonchovia. The dwarves hold the great alchemist and conjuror Professor Grunkasse in high esteem, possibly because his head is moon shaped (or does he wear a warmask to aid his spells?) 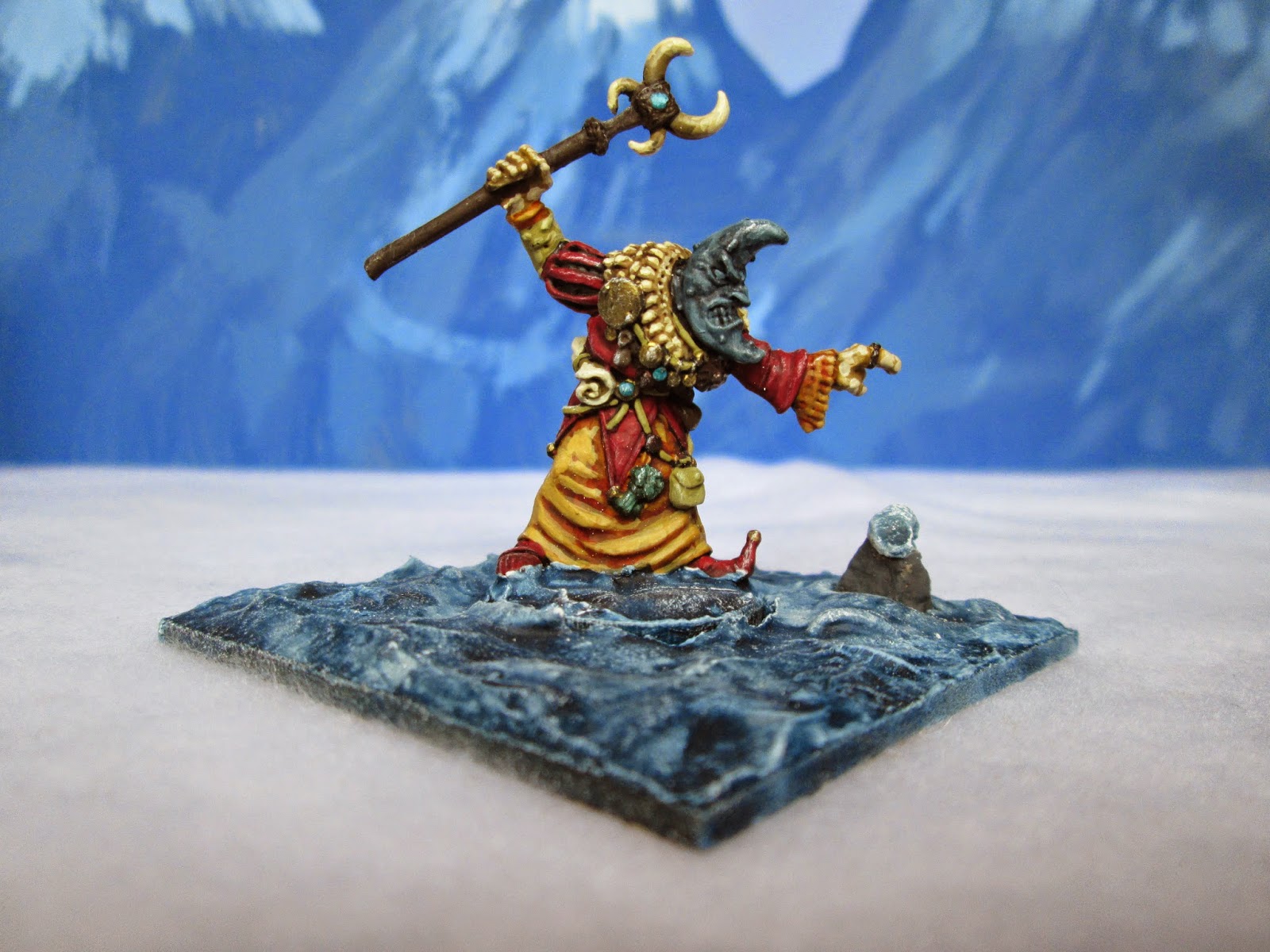 (picked this guy up in a dumpbin at a show. He was missing a hand so I added a plastic zombie hand an an old Rafm staff).

Pride of the army are the Walrus knights, 6 HOTT knight elements in total. 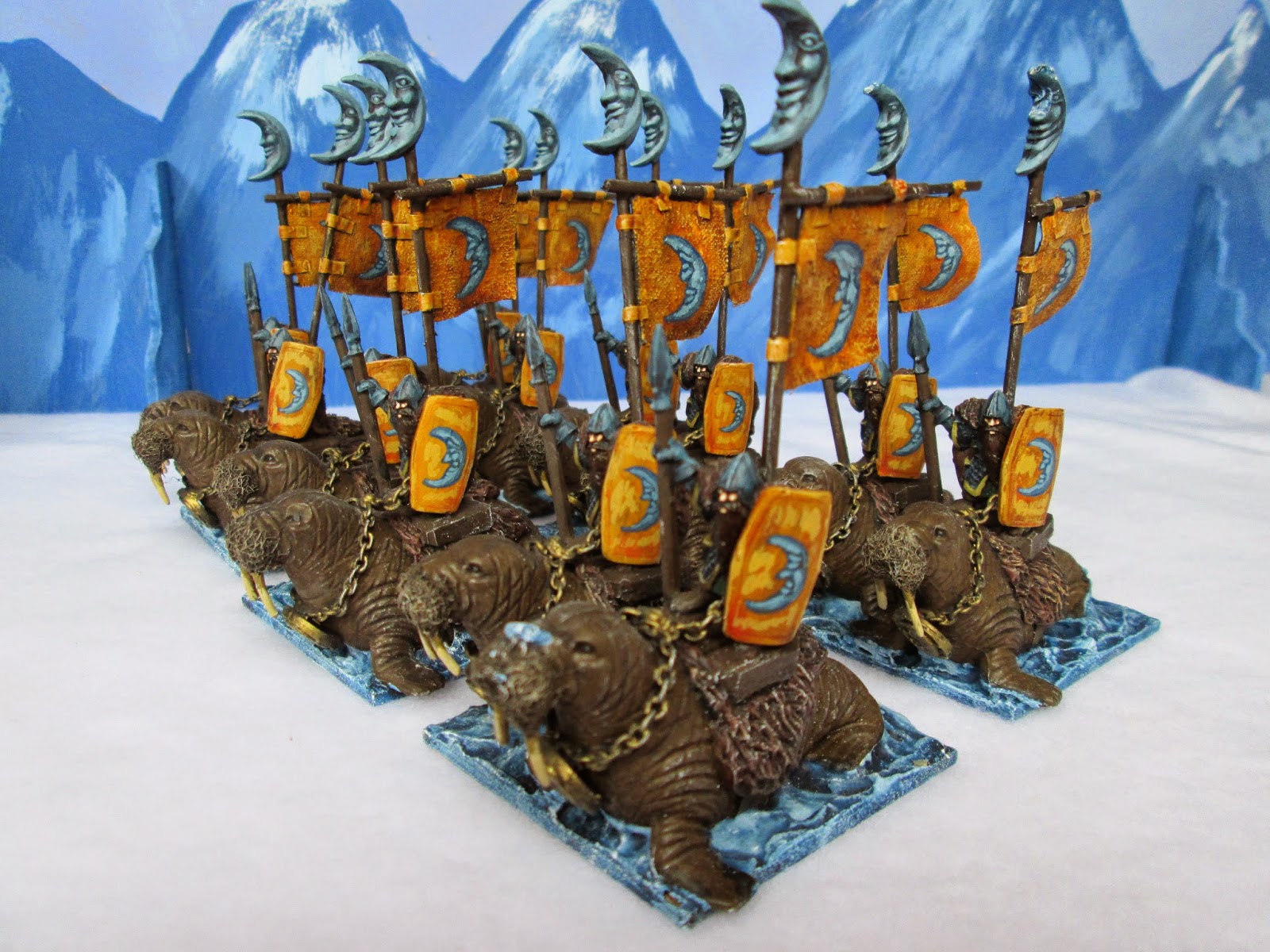 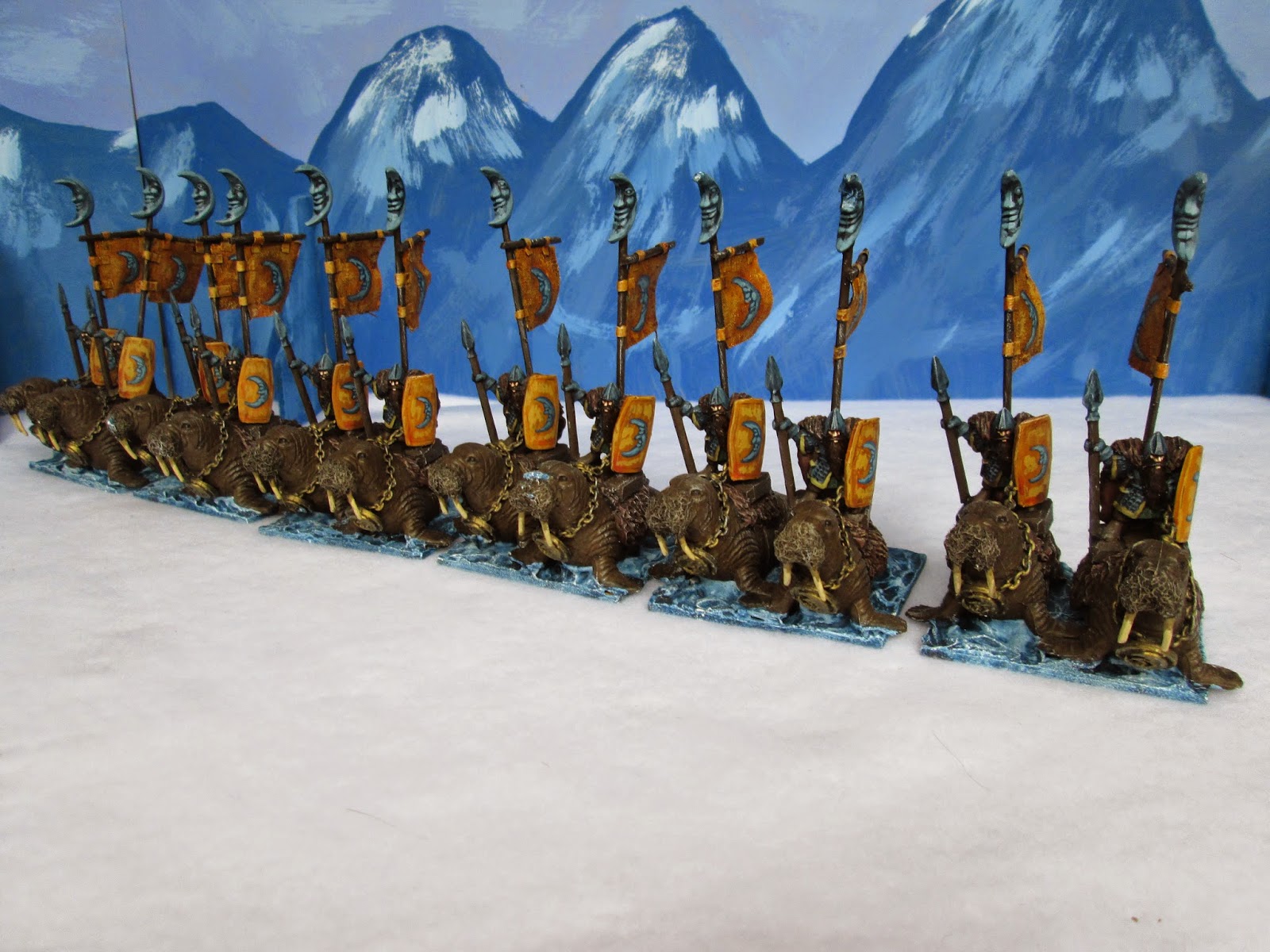 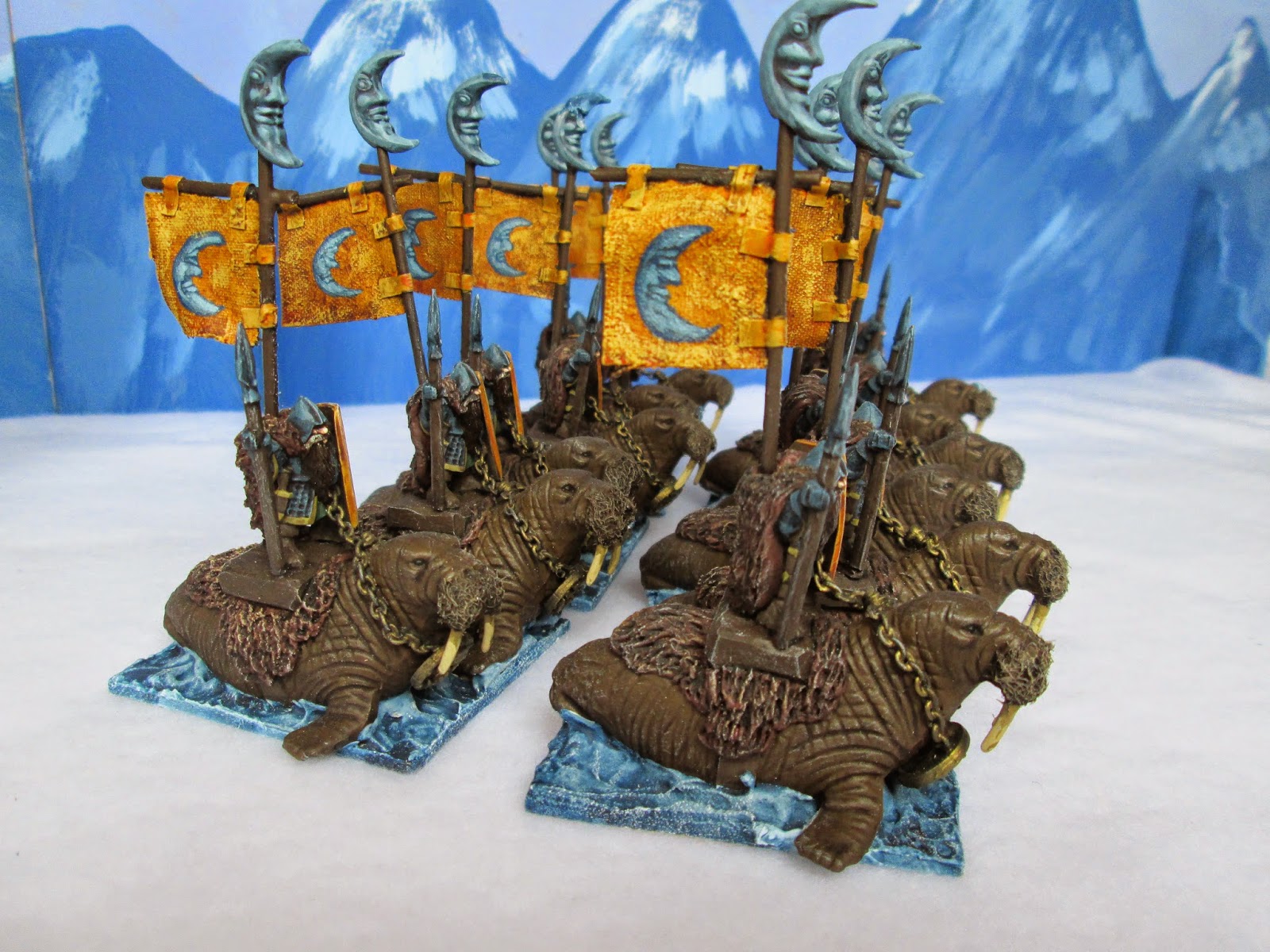 (I've had these guys in mind for years now, so it's nice to finally realise the idea. Cheap EM-4 plastic dwarves off ebay riding Britains walrus also from ebay. The walrus medallions are GW shields with moon device on them and the flagpole moons are plastic beads.....from ebay. Each figure cost about £1.20 in total).

The footslogging infantry are 6 blade elements, with 2 extra to make a unit of 20 for other games 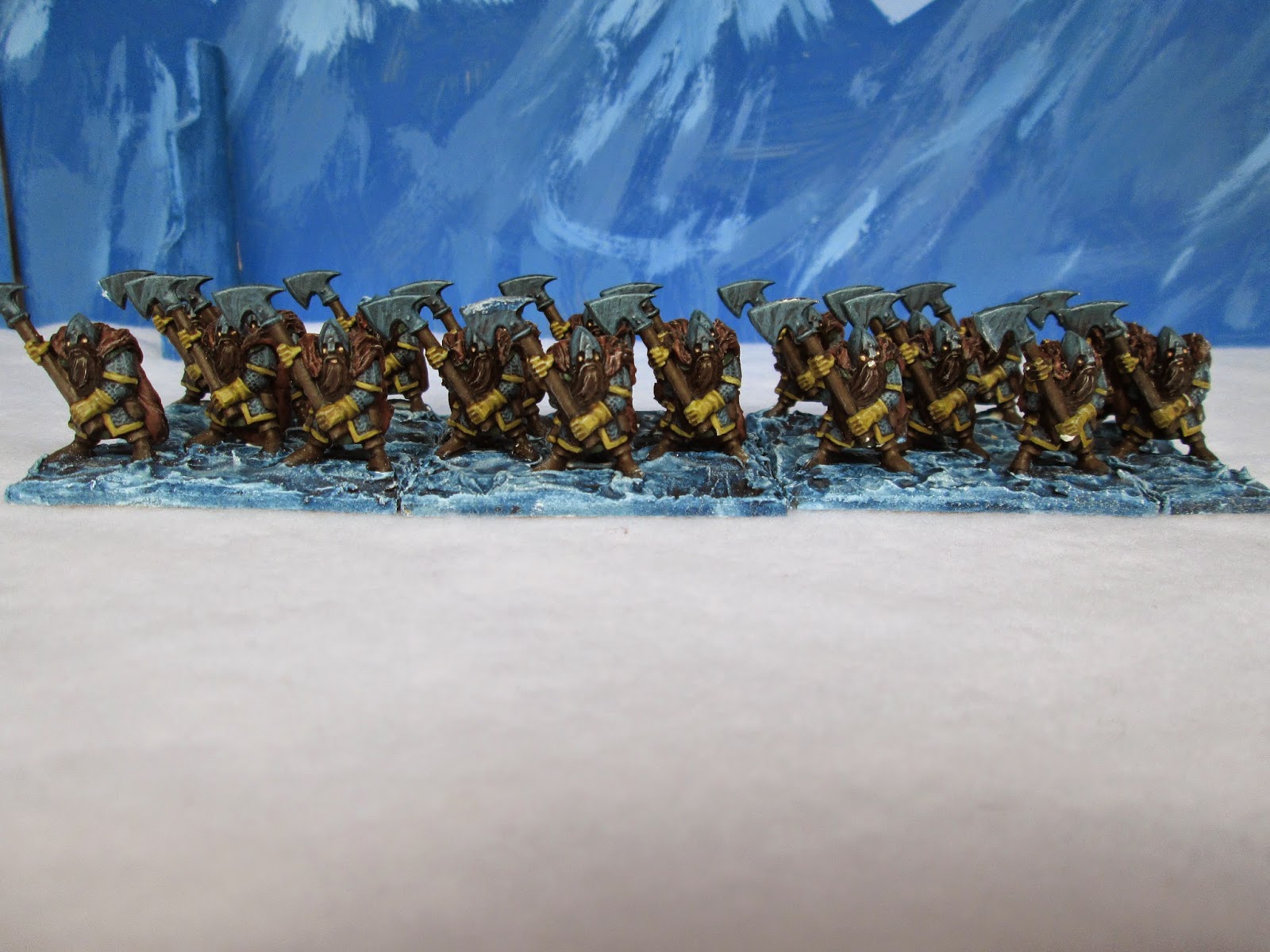 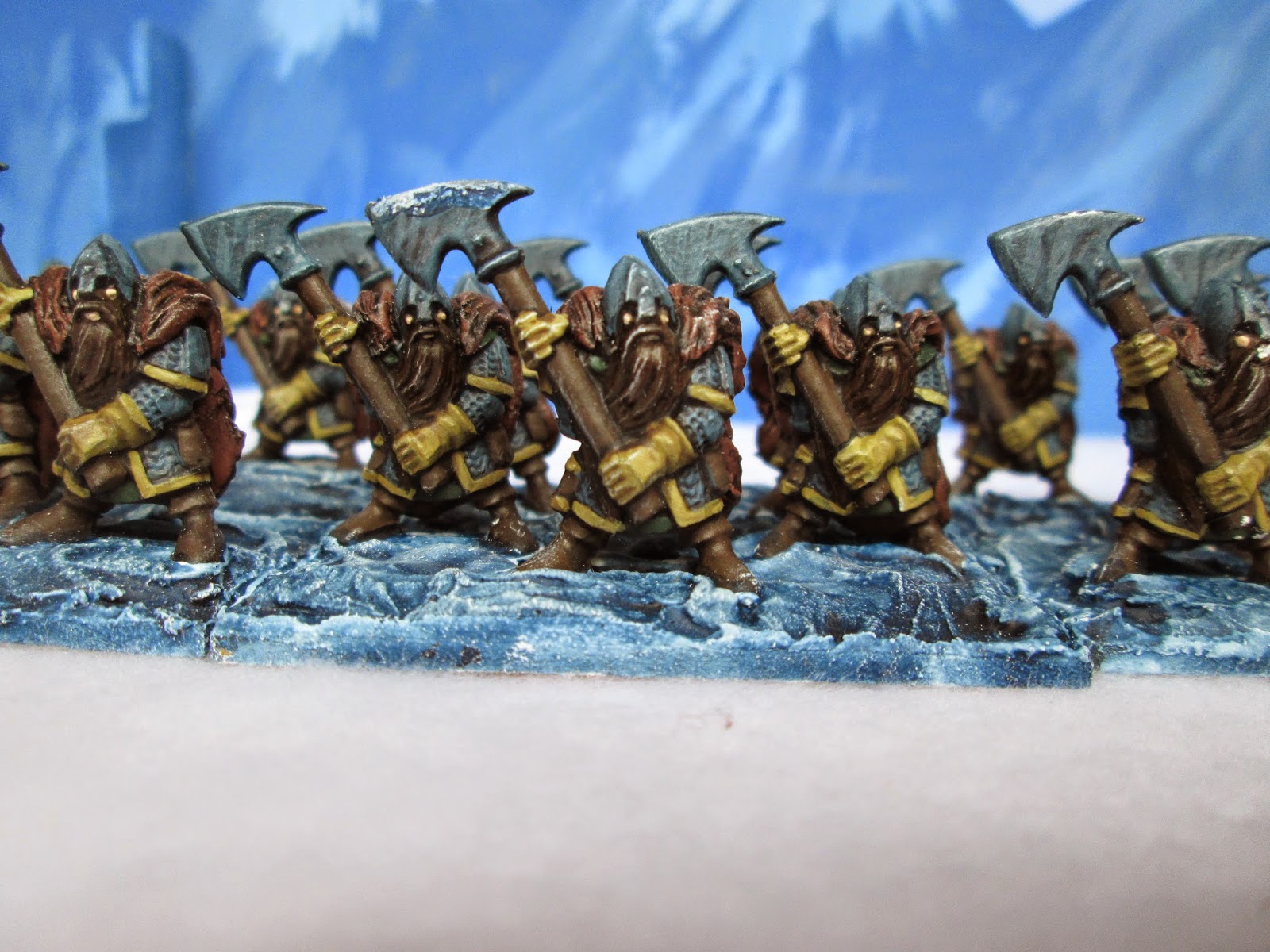 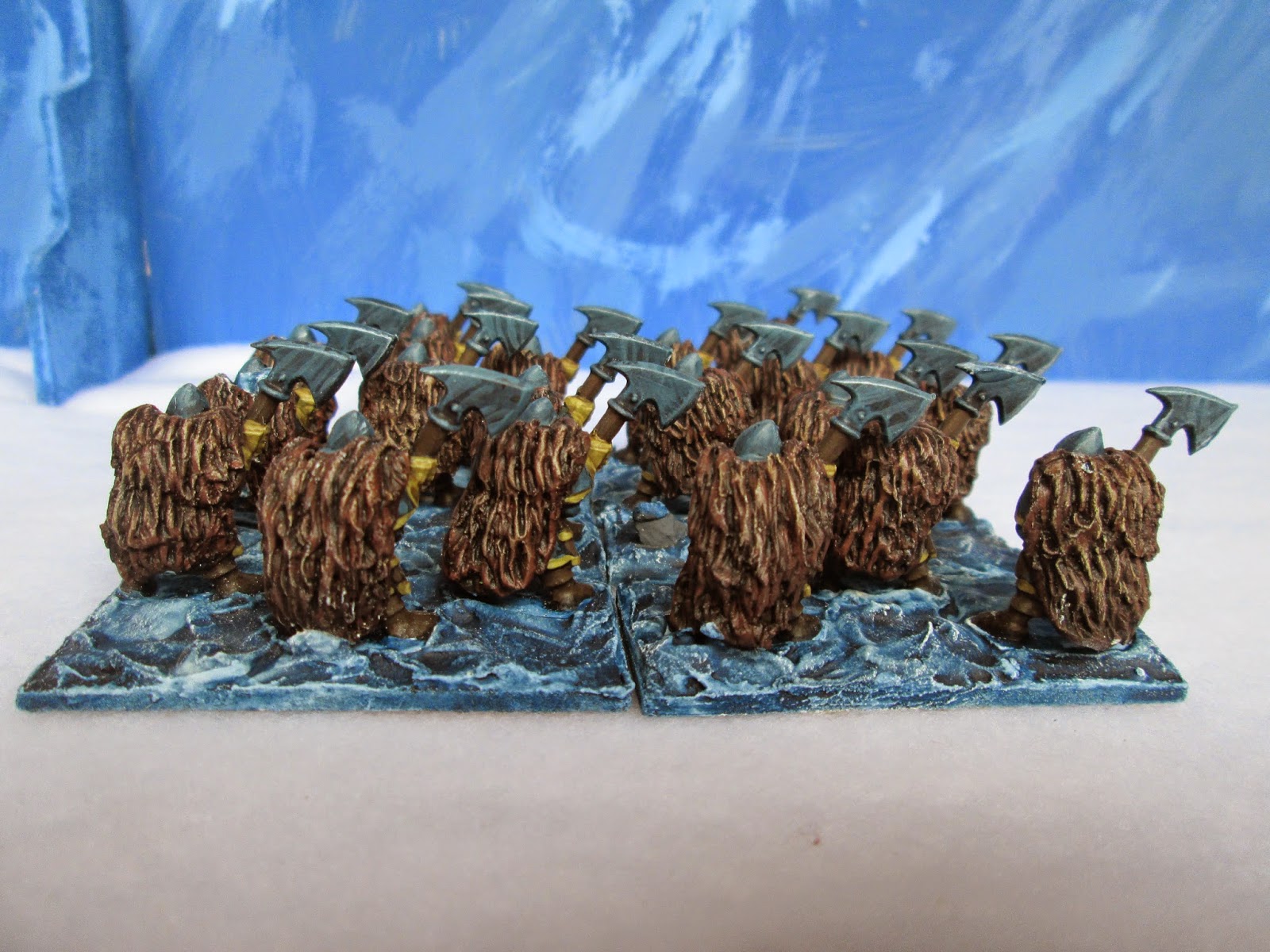 A Hero Jasper Brummbar mounted on his faithful steed, and 2 Beast elements, the singing bears of Norrin 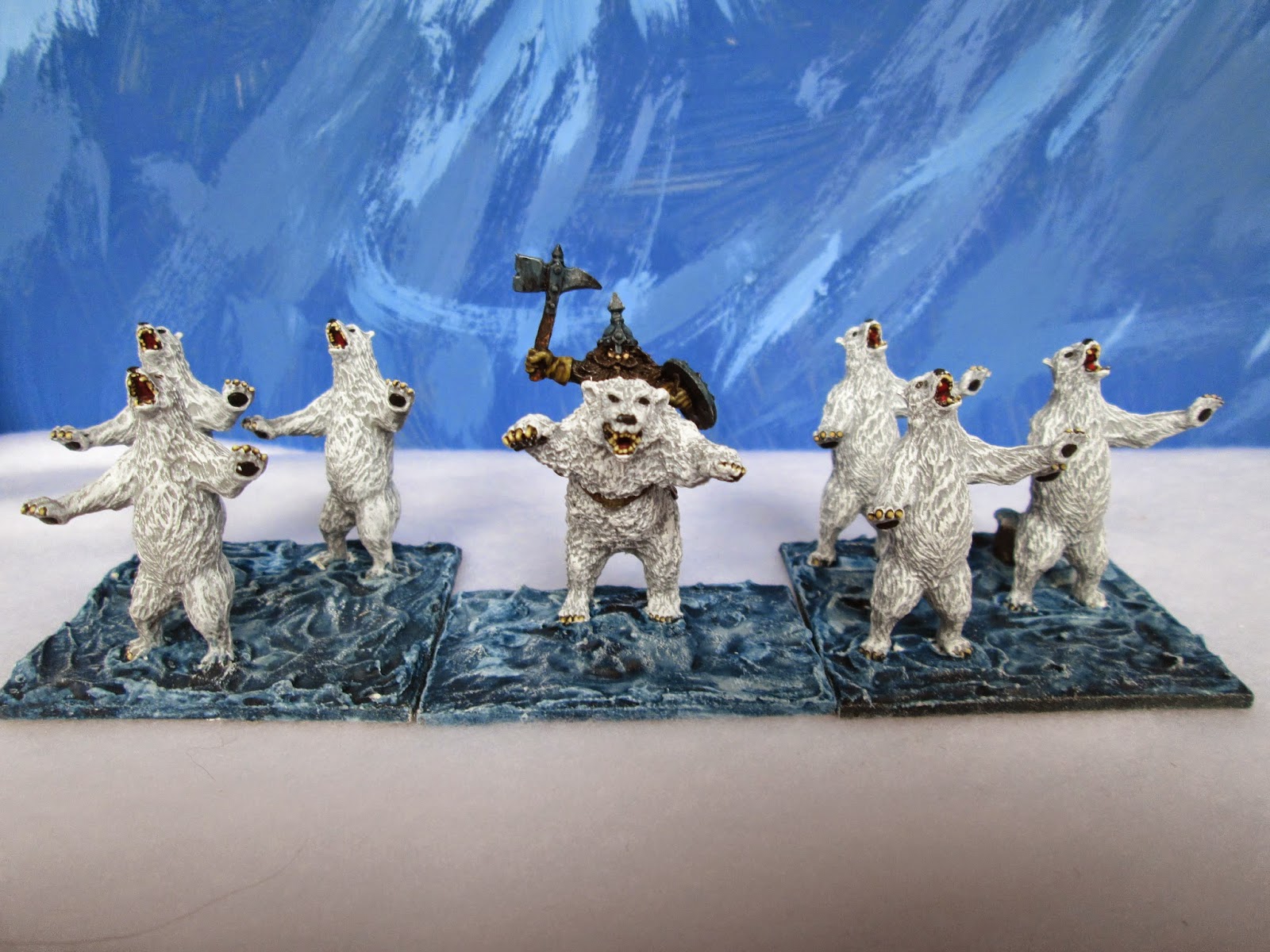 (Brummbar is a Reaper figure, and the singing bears are plastic ebay finds)

2 Behemoth elements in the form of  hairy Struppigs with howdahs. As well as the Pewter Moon, the howdahs bear the Sunchild device of their allies. 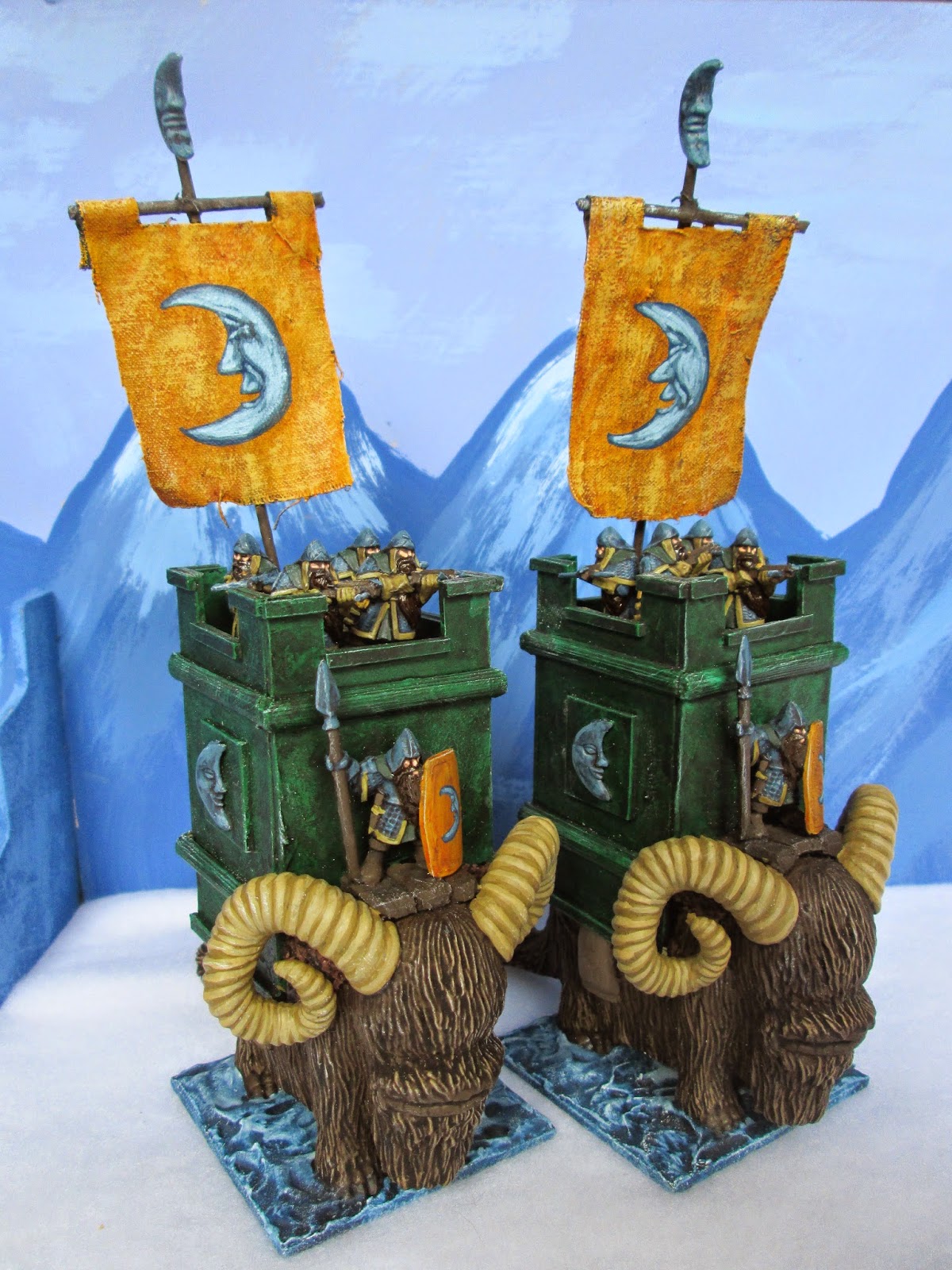 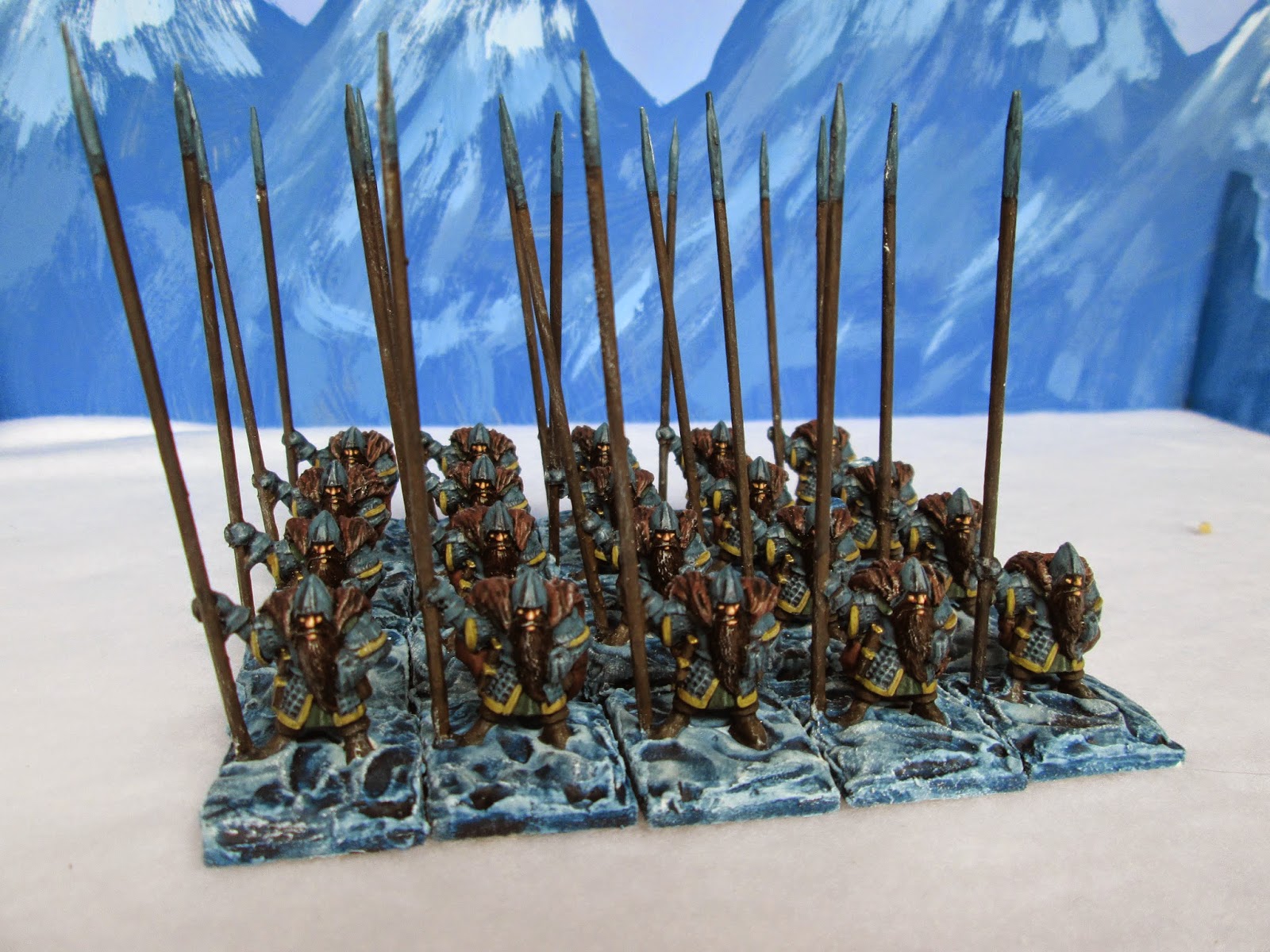 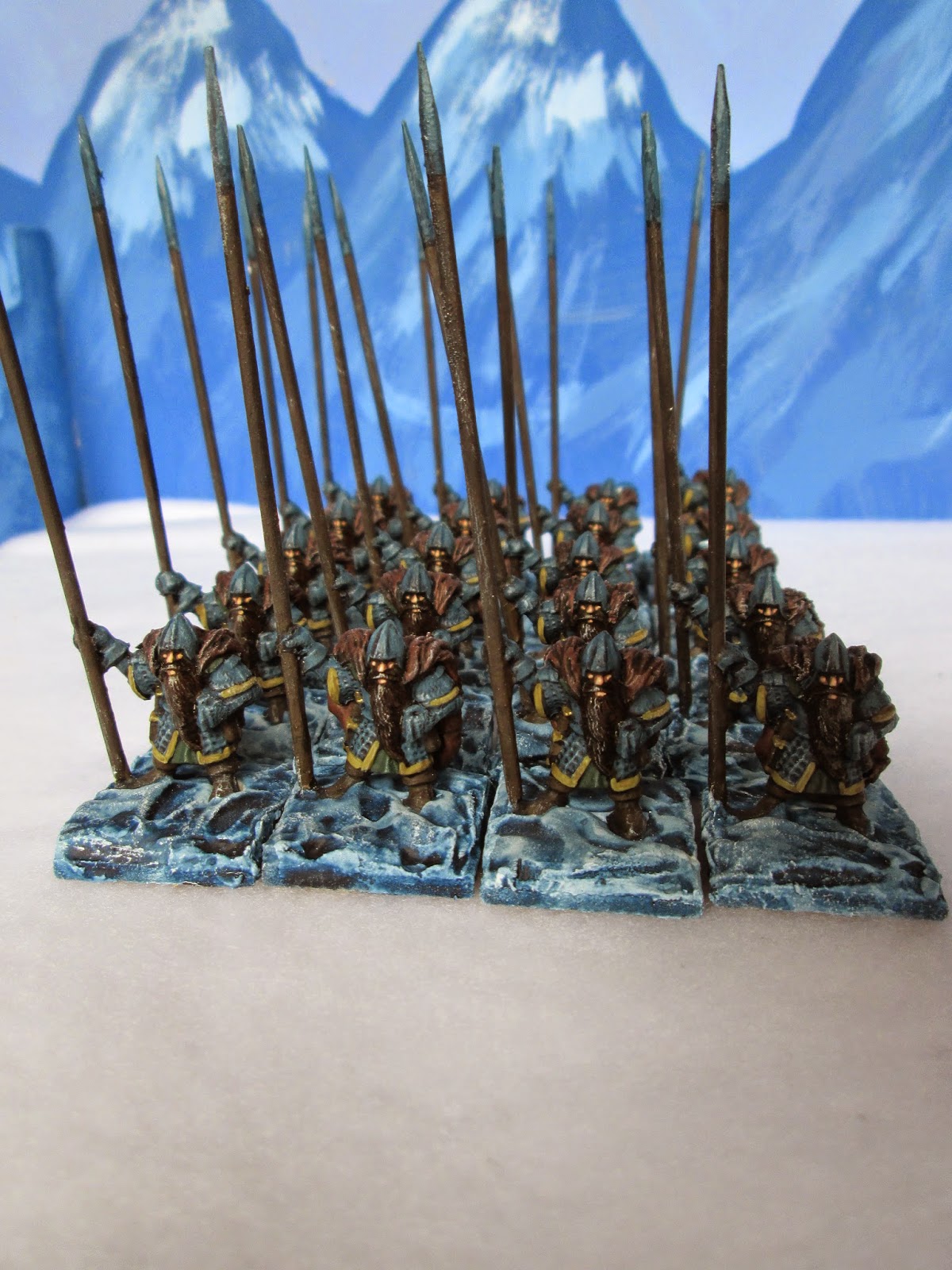 The whole army in array 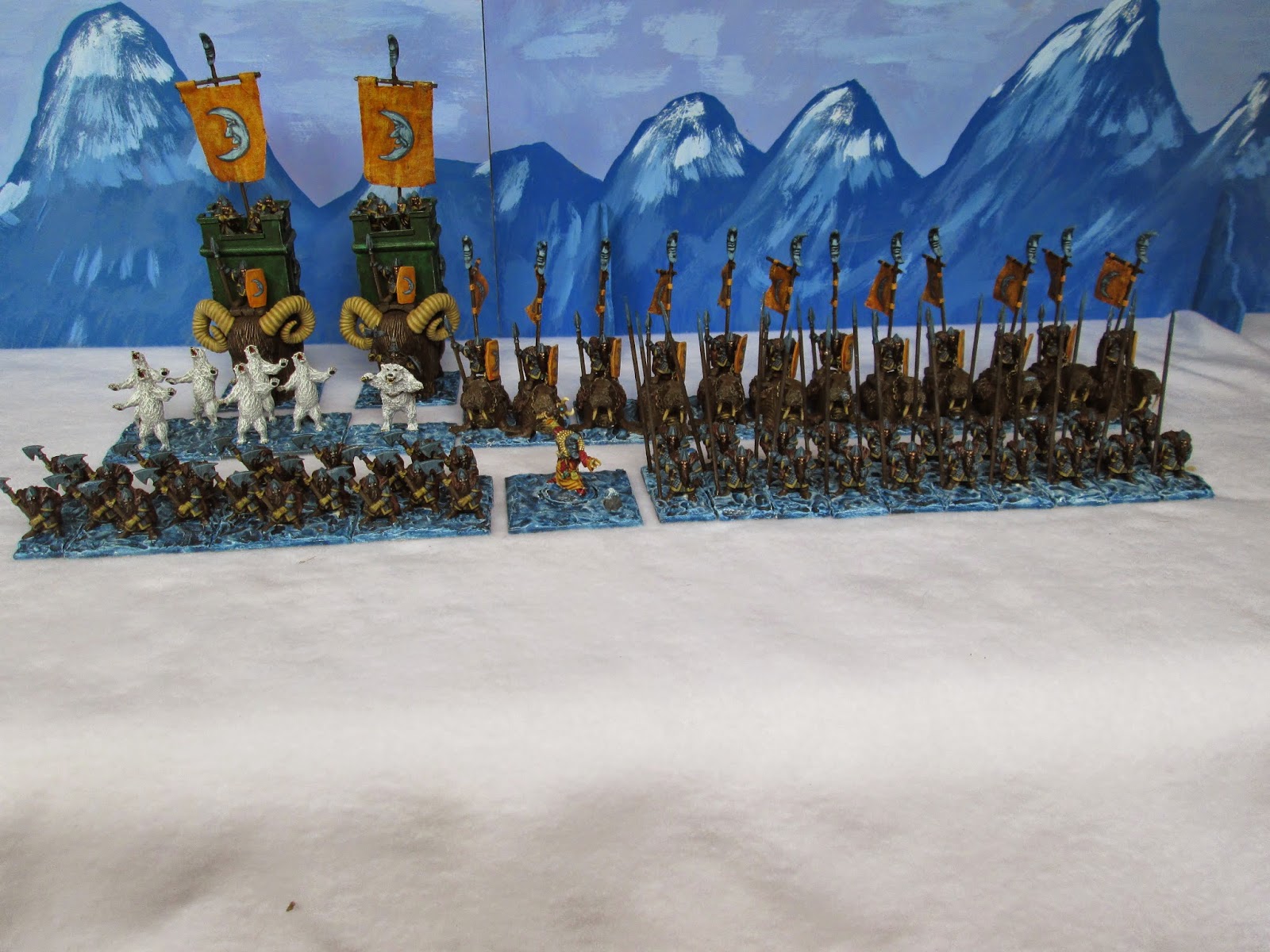 There are more forces to follow for this campaign. Owl worshippers, Ice Gypsies and of course the Court of the Crimson King.

I really enjoyed banging these out, and spent little time on overshading, relying on loads of washes from GW and Army Painter (the latter are really good).If I missed a bit, or went over a boundary with the paint I just carried on regardless. In recent years I've been a bit pedantic with my brush, resulting in minimal amounts of painting being done and boredom with a project before completion.

Apropos the last comment, I realised why my Thistlewood project ground to a halt. It was the bases which were dull and drab. So I'm going to redo them using Tetrion filler as above but washed green. This is how I (and all my gaming mates) used to do our bases in the early 1980's, so they are suitable old school in appearance.

I've recently linked up with a gaming buddy (Von Trinkenessen) from those days  (and we are planning a few games of Prehammer (we used to use WRG Renaissance rules for our fantasy games), so I am really looking forward to seeing his armies again after 30 years, and trouncing them.

Posted by Springinsfeld at 20:03