THE LOYAL CENTAURS OF KING AMIAS

After a long break involving a broken pc, viewing secondary schools and other things that only happen in the real world, it's nice to drop back into ToySoldier land . The idea of getting my Thistlewood game finished by the 30th anniversary flew out of the window as I suspected it would, but I have been plodding away at it and now only have about 10 figures to paint before starting on the terrain. 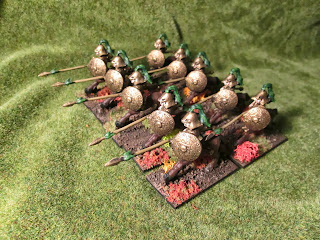 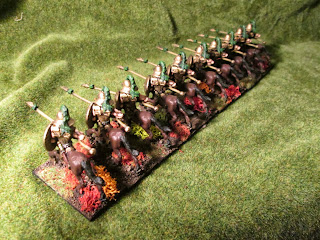 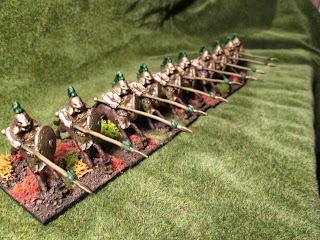 Here are the Loyal centaurs by Garrison Miniatures. Certainly Old School and still in production (just). I have been fiddlearsing about with the bases and although not entirely happy with the final results I have gone for this slightly Autumnal look.

A chance comment on another blog (sorry, can't remember which one) mentioned that older style bases with little or no extra flock or detail enhanced the figure and I completely agree. Unfortunately by that time I had already started basing my troops like this, but have another project brewing which will be really old school....plain bases, gloss varnish and no figures later than 1980...here is a taster of Royal Armies of the Hyborean Age 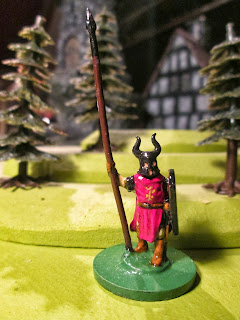 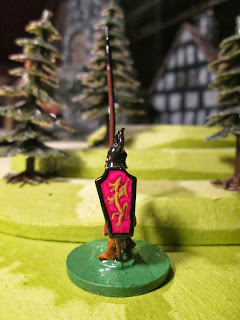 I have to say the shiny finish (I used Yacht varnish) and lack of heavy shading makes the figure much brighter (and considerably quicker to paint). Not everyone's  cup of tea, but I like the toy soldier look. Again, a figure from Garrison's bespoke Hyborean range.

Posted by Springinsfeld at 20:52