Not been doing a great deal of painting this week having been afflicted with galloping gutrot, which typically struck me at work on Wednesday, I soldiered on hoping it would get better but Thursday (my day off) I was laid up in bed all day, returned to work Friday feeling a bit more chipper and then was stricken down again last night just in time for another day off.

Slowly progressing through the evil army and have finished the 5 trolls required. Here is a picture from White Dwarf 45 showing 2 of the trolls in Gary Chalk's or Joe Dever's collection 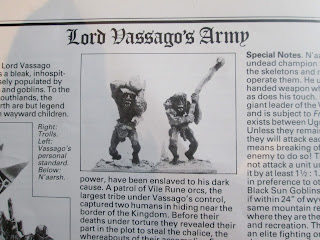 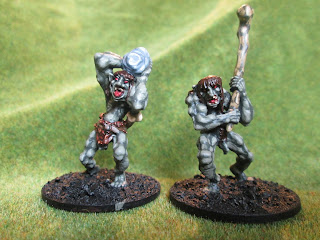 My versions of the same figures (bases will be finished en masse when army completed). I think these are from the Fantasy Tribes range, they have a stylised letter A cast onto the base. 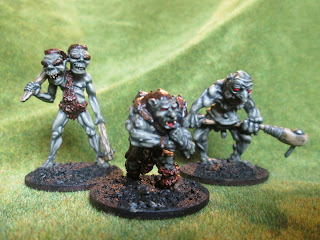 The 3 remaining trolls, from left to right, Fiend Factory, Asgard and Fiend Factory again. A feature of a lot of these 80's trolls is their prominent dangly bits, no doubt they will scare King Amias' prudish troops with 'the last turkey in the shop' routine.

I coveted the older Fiend Factory troll on the far right for ages but could never muster enough pocket money to buy him (he was £3 I think in 1981 or 1982 and you could get 10 human size figures for that amount), I finally managed to get  my parents to buy him for me after I had had my appendix out...the lengths we collectors go to.

Posted by Springinsfeld at 14:01