As work progresses slowly with Lord Vassago's army for an Oldhammer Thistlewood refight, I have been bending my thoughts for figures to use for the army of King Amias. My spec is to use figures that were available in 1983 or before, and get them as cheap as possible, being inspired by Mark at The Ramshackle Fort who is working on a definite budget, profoundly satisfying to build up armies this way.

I have already got the Loyal Half Elves finished, and have sourced the centaurs from Garrison Miniatures.
I was hoping to use Ral Partha centaurs, but the figure I like seems to be pretty rare and usually sell on ebay for upwards of £5, more than I am willing to pay, old skinflint that I am. The Garrison ones however are £1.80 each, and should paint up pretty well. 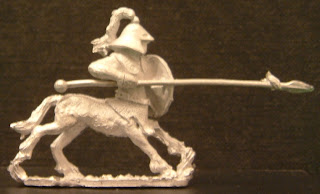 Back in the early 80's , I had visions of serried ranks of Ral Partha historicals to act as the human troops, and spent hours looking at the small pictures of them in the Citadel Yellow and Blue Catalogues. These very nice figures are still available from Iron Wind in the medieval range and retail about £1.60 each, which is rather a lot when you add postage from the States, plus a likely tax walloped onto them at this end, they are very nice however, and I am trying to convince myself to buy some to satisfy the lust for them I had in 1983 when I was 14. 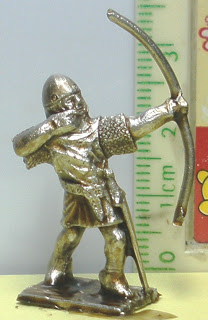 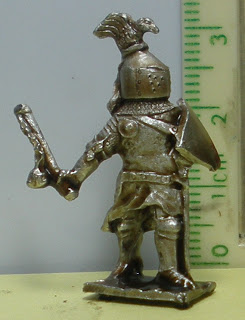 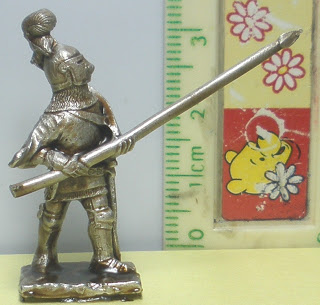 which at 75p each seem very attractive, and definitely old school. The army has 20 pikemen (I interpret this as halberds or bills, rather than long spears), 20 swordsmen and 20 macemen, with the option to arm a percentage with missile weapons. I will probably give the swordsmen bows. The 10 Royal Guard will be this figure from Garrison, part of their old Armies of Hyboria range, these are Conan's Aquilonian Black Dragons 85p each. 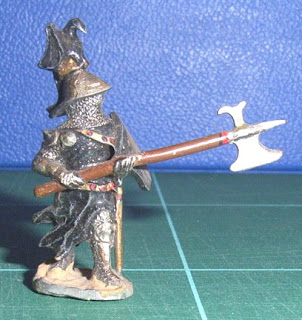 Baron Galen's cavalry are 30 in number, and I already have 20 Minifigs Valley of the Four Winds Gondemarian cavalry figures (picture from Lost Minis), which look suitably different from standard western medievals to be provincial troops

, and will make up the other 10 as more traditional knights again from Garrison £1.80 each(I like cheap) 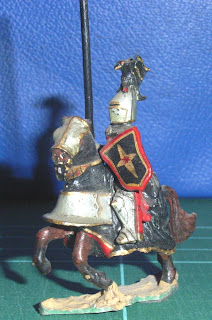 So far so good, jsut need to buy and paint them now.

Posted by Springinsfeld at 23:06